Remembering Sunset Speedway: The only place to be on Sunday Night!! 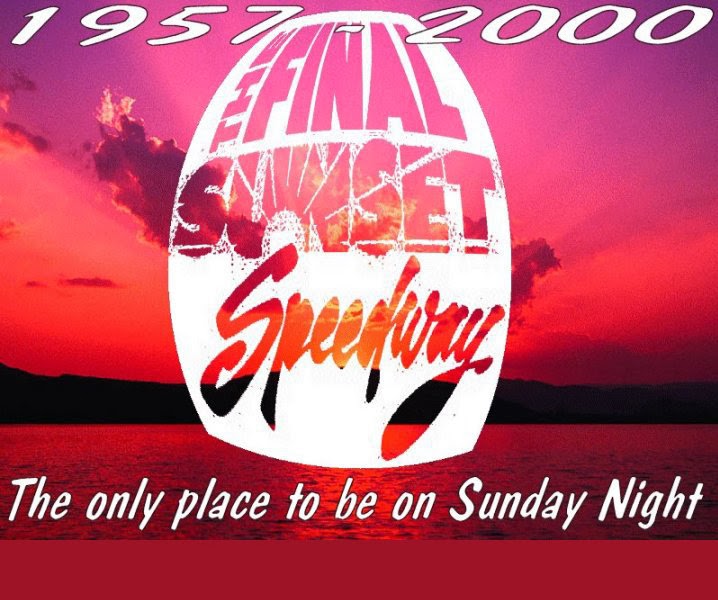 By Lee Ackerman
Omaha, Neb. - It has been over 12 years since the City of Omaha grew out to Sunset Speedway in Northwest Omaha and forever silenced the engines after 44 years of competition. The final Sunset occurred on October 8, 2000 with the last race being the Con Agra Cornhusker Classic 100 sanctioned by the NASCAR Busch All Star Tour Series.

Sunset Speedway was the creation of Albert Hadan. Al was a gear head, and motors and cars were his passion. After a stint as a driver and builder of stock cars, he decided that he wanted to build a racetrack to the specifications that the local drivers wanted. In 1954, he set this plan in motion along with his brother August and by 1956 the blue prints had been drawn up for a quarter-mile racetrack and the location was to be 2 miles west of Irvington, Nebraska, a suburb of Omaha. The grandstands would face to the west providing race fans with the most beautiful sunsets.

On May 26, 1957 the first race was held at Sunset and the winner was Glenn Robey, who in 2010 is still racing at the young age of 79, the eighth decade in which he has raced. It became the place to be in the Omaha area on Sunday evenings for the next 44 years. First it was the coupes and sedans and over time those cars were replaced by the popular late model class, and various support classes.

In 1969 the track was sold to a couple of Council Bluffs businessmen named Lyle Kline and Gaylen Brotherson, who improved the facility and added several special events. In 1972 it was the Cornhusker Hawkeye Challenge. Who can ever forget the 1977 Cornhusker Hawkeye ran on a Sunday afternoon because of being rained out the previous evening? It ended up being a race between two Iowa racing legends, Curt Hansen and Ed Sanger. Hansen would pass Sanger on the final turn to win the race.

In 1973 two more specials were added; the Spring Invitational and the Nebraska Triple Crown featuring Late Models, Modifieds and Super Modifieds/Sprint Cars. The Spring Invitational would be a staple at the track for many years and who else but Ed Sanger won the inaugural event. The Triple Crown lasted just five years, but we still remember the legendary Jan Opperman behind the wheel of the Speedway Motors 4x Sprint Car blitzing the field in the 1975 version.

In April, 1976 the track was sold to Larry Kelley and the track would remain in the Kelley family for the rest of its history with Larry’s wife Sharon and son Craig taking over the promotion in 1990. During the late 80’s and early 90’s, the Kelley’s transformed Sunset into one of the premier short tracks in the country with weekly crowds averaging 4,000 fans or more.

On April 18, 1982 the World of Outlaws made their first stop at Sunset with Steve Kinser getting the win after Doug Wolfgang was disqualified for changing a tire on the race track. On July 3, 1986 the NASCAR Busch All Star Tour made the first of many stops it would make over the years at the legendary speed plant. Fittingly, Joe Kosiski would win the race.


During the 1990’s Sharon and Craig Kelley would make the track into one of the finest facilities in the country. Running three classes of cars; Late Models, Grand National (Limited Late Models) and Pro Ams (Street Stocks), you could count on at least 30 cars in every class. If you won the late model feature one week, it wasn’t unusual for you to have to run one of two B features the next week just to make the feature.

The Kelley’s instituted a number of innovations that helped to provide for a good, timely evening of racing. They used 4WD Pickup Track Packers to prepare the track on time, without using race cars. Point average inversions produced better heat and feature races. On a yellow flag the cars were stopped, realigned and sent on their way making for faster restarts and had perhaps the best fire and safety crew, equipment and safety rules in the industry. The Kelley’s were nominated 3 different times for the national Auto Racing Promoter of the year award.

One thing seemed to never change at Sunset no matter who ran the facility. It was still a close drive from anywhere in Omaha, the Sunset Inn was famous for its broasted chicken and the grandstands were very close to the track and you could literally feel the action and look into the driver’s eyes.

Another thing that did not seem to change at Sunset was that the last name of many of the drivers never seemed to change. There always seemed to be a couple of Robeys and Tilleys, some Jorgensen’s, plenty of Zeitners, a Wyman or two and of course the ever present Kosiski clan which hauled out more track championships than anyone can count.

But it all came to an end that October day 10 years ago with that final race. It was a bitter sweet day/night. It was a great day for racing but it would be the final event ever held at the track. A week before the area racing community had lost Dwight Wrich (son of former Sunset Speedway Champion Bill Wrich) in a fiery crash in Iowa. As the sun began to set in the west fans began to feel a knot in their stomach’s, knowing it would be the final time they saw the sun set at Sunset Speedway.

Fittingly the winner of the last race at Sunset was named Kosiski; Joe Kosiski to be exact. After all, no other family had dominated the racing at Sunset the way the Kosiski family had. Taking the lead ironically on lap 53 from veteran Gary Webb, Kosiski would win the 100-lap affair with Darren Miller second and Steve "Ace" Ihm third.
”I have so many memories of Sunset.” says former track announcer Stan Cisar Jr. “Those emotional first wins by Howard Koziol and Scott Koskovich. Koskovich hitting the edge of a billboard in turn three and cutting his car in two. The epic battles between Dave Chase and the Kosiski’s, and later Kyle Berck and the Kosiski’s. The list just goes on and on.”

As long time Sunset fan Ron Meyer wrote in his 2006 Dirt Late Model Story on Sunset; “I sat in the same section at the track for years. I should have cut out the plank I sat on before they tore down the grandstands. I swear it had an impression of my butt,” recalled Meyer.

If you talk to people in the Omaha area, they all have a story about Sunset; even if they weren’t race fans at some point in their lives they went to Sunset. They remember cars going off the backstretch into the trees and usually showing up a couple of minutes later at the pit gate in turn four.

They remember Roger Hadan’s horrific crash in turn three with the car separating at the firewall. Miraculously Hadan did not suffer any injuries. “I was knocked out and when I came to there were all these flashlights shining and I thought I was gone.” remembers Hadan. “Then I saw Speedy (Hill, the longtime Sunset Safety Chief), and I said, 'What are you doing in my car.'” The car was totally separated and Hill was standing next to Hadan’s leg.

They remember Bob Parker and Bud Burdick winning in the early years, the great battles between Bob Kosiski and Jim Wyman in the early 60’s. They remember Ed Kosiski on his way to winning the Busch All Star race in the early 90’s running so high through turns three and four that they thought he would knock down the outside wall at any time.

Avid Sunset race fan Wayne Cue remembers the night Bill Martin rode down the entire length of the front stretch retaining wall with sparks flying everywhere. Recently an “I Remember Sunset Speedway” Facebook site was set up and it quickly had over 1,250 members, many sharing their memories of Sunset.

But most of all they remember that Sunset Speedway was only place to be on a Sunday night!