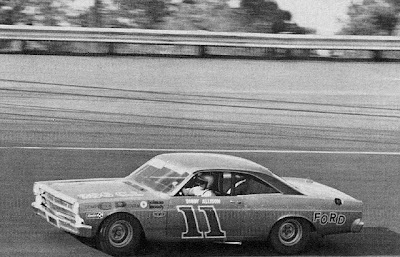 Rockingham, N.C. (October 29, 1967) - Bobby Allison finally climbed into a bucket seat that would carry him to victory, and Ford Motor Company found a new combination.

Allison, a little guy from Hueytown, Ala., who had had two factory-backed rides previously this season, drove a factory Ford, sponsored by Fred Lorenzen, to victory in Sunday's American 500 here at North Carolina Motor Speedway.


The win evened things up between Ford and Chrysler on the South's superspeedways for this season. This was the last big race. The two companies won five races each.


Ford won both races at Daytona, both at Atlanta and yesterday at Rockingham. Chrysler captured two wins at Darlington, two at Charlotte and one last spring at Rockingham.


Allison came to the front and took the lead for good on lap 389 in this 500-miler over a banked one-mile track, He grabbed the lead when Cale Yarborough span and wrecked when the engine blew in his 1967 Ford.


Allison was in the lead six different times and Yarbrough seven times.


The race, which required more than five hours to complete, was marred by several multi-car crashes. All total, the caution lights were flicked on nine times for 69 laps.


The race was hotly contested until Allison took over, and then he coasted to victory. Pearson finished second in another Ford, but was a lap behind, then came Paul Goldsmith in a Plymouth, Foyt in a Ford, and Johncock in Mercury to round out the top five.


The first wreck occurred in the first turn on the 20th lap and took out Jack Bowsher, Bob Wawak and Earl Brooks. Bowsher was running second at the time and the leaders were passing slower cars when apparently Frank Warren cut down in front of Brooks and the cars started piling up. Lee Roy Yarbrough was involved, but continued in the race. Most all the front runners dodged and ducked their way through the spinning cars which nearly blocked the track.


The second caution took out five cars and happened on the backstretch as the cars came off the second turn. Apparently the timing chain broke on Bobby Isaac's car and he lost his power. When he did James Hylton rammed into the rear of Isaac's machine, then Jim Paschal hit the rear of Hylton's car and Hylton spun straight into the wall. He bounced off the grandstand wall and when he did G. C. Spencer plowed into Hylton's left quarter panel. Then came Wayne Smith and crashed into the pileup. Hylton and Smith were carried to a Richmond County hospital where they were held overnight. A hospital spokesman said the two were held for observation, but that neither was seriously hurt.


The other wrecks were less serious, however, on the fourth caution an accident occurred in the pits which could have been serious. This one took out Petty.


The fourth caution waved when Frank Warren spilled oil on the track from a blown engine. The front runners were pitting. Petty was following Pearson down pit road when Pearson ducked into his stall. Petty rammed into the back of Pearson's car, and then bumped against Donnie Allison's Ford. Allison's crew was already changing tires when Petty bumped the car, and one crew member nearly got pinned between the two.