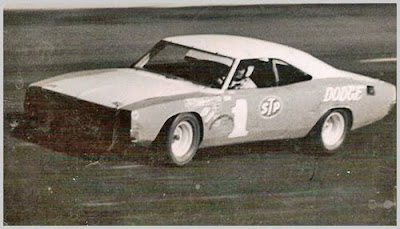 Keokuk, Iowa – Ernie Derr figures it isn’t too difficult winning a championship. The tough part is defending it.
Derr should know…

He just completed his 20th campaign as a race car driver. Last year, he won his fifth consecutive driving title in the International Motor Contest Association and his 10th overall crown in what has become a legendary career.

“It gets tougher as the years go by,” Derr admitted. “Good young drivers show up every year, learning the tricks of the trade and then go on to bigger things. I’ve seen a lot of them come and go.”

Derr, who hails from Keokuk, Iowa, a community noted for producing numerous good drivers, has no plans to retire.

“I enjoy racing, and as long as I have good health and reflexes, I’ll continue to race. I expect to be driving at least three or four more years and if I’m still in good shape, stick with it.”

Derr made shambles of the IMCA circuit last season, competing in 30 events and taking the checkers 25 times. He compiled 3,920 points to 2,480 for second place finisher Fred Horn of Marion, Iowa.

He doesn’t know how many races he’s won in a career that started back in 1950.”Somewhere over 250, probably,” he said. “The records of some wins were lost when the headquarters building at one of the sanctioning bodies burned down.”

He expects the 1970 season to be his toughest ever. For one thing, a new rule change has left IMCA promoters hopeful that the circuit will be it’s most competitive ever. Unlike the past year when stock cars up to four years old were eligible to compete, the new rules states that cars cannot be older than three years.

The new rule change doesn’t bother Derr, however. “I’ll be back in a 1970 Dodge Charger. The 426 cubic hemi is a proven engine and the handling characteristics makes it almost unbeatable on short tracks.”

Derr also credits some of his success to his knowledge of the IMCA-sanctioned tracks. “I’ve run them all, dozens of times, and except for the normal changes that come from the weather and normal track use, I know every bump, every dip. It takes a while for drivers to learn these things.”

As for possible retirement, Derr confessed that his future depends on the racing careers of his two sons. Mike, 21, a senior at Northeast Missouri State Teacher’s College, will graduate in the spring with a degree in business education. Steve, 20, is a student at the same school and is also an education major.

Both want to follow in their dad’s footsteps on the track. Mike competed in his first IMCA events this past year.

“Mike looked awfully good in the two races he ran,” Ernie beamed. “I’d like him to race during the school year, but its difficult trying to study, take exams and then run off to a race track. I don’t want him to miss any credits; it’s more important for him to finish his education. He’ll have a lot of time to race later on.”

Mike’s two races were at the Iowa State Fairgrounds in Des Moines and he came in fourth in both events.

Steve has yet to compete in a sanctioned event, but Ernie is hopeful the youngster will get into action in 1970. He’ll make is debut on dirt tracks around the Keokuk area.

The boys have been around racing all their lives. Aside from following their father all over, their uncle, Don White, is one of the nation’s top drivers, having won the United States Auto Club stock car championship in 1968.