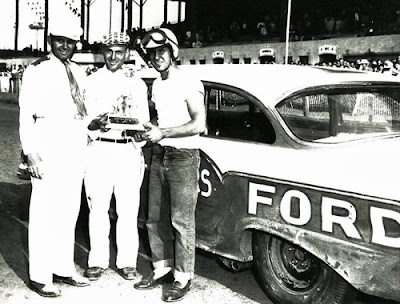 By Lee Ackerman
Omaha, Neb. - As was the case with so many of the Midwest fairgrounds tracks, the Topeka Fairgrounds actually was build for horse racing in 1878. Car racing would make its first appearance on the ½ mile track in 1902 and races would be contested there on a regular basis until 1941 and the start of World War II. The International Motor Contest Association (IMCA), which had been founded in 1915, sanctioned some of those pre-war races and some were not.

But its heyday would be the period of time after World War II when auto racing became the craze in the country. In 1946 the track would rejoin with a pre-war promoter in the IMCA and that series would make several stops a year at the fairgrounds through the 1975 season. While other races were certainly run at Topeka after the war our focus will be on the IMCA racing at the fairgrounds. The track would see racing held at this wonderful facility for almost 80 years before being terminated in 1980.

Whether you remember it as the Topeka Fairgrounds, the Mid-America Fairgrounds or the Kansas State Free Fairgrounds, one thing is for sure, in its heyday it provided Kansas and Midwest racing fans with some of the best action in the region. 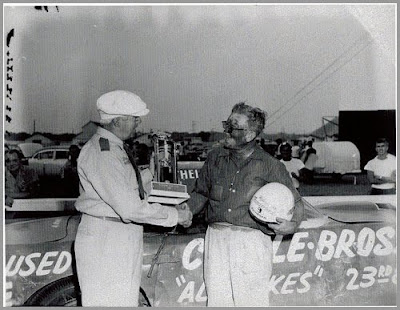 
September 10, 1946 would be the return of IMCA racing to the Topeka Fairgrounds for the first of three days of big car racing and the class of the field that first year would be Indianapolis, Indiana’s Jimmy Wilburn wheeling his own #39 to victory twice with Herschel Buchanan (later an IMCA stock car champion) winning the third feature in his HAL.

In 1947 the Big Cars would return again in September during the fair and Wilburn would totally dominate the action winning all four feature events. Wilburn would add two more wins in 1949 to become the all-time IMCA Big Car leader at Topeka with eight feature wins.

May 30, 1949 would be an historical day at Topeka; it would be the first IMCA Stock Car race (some say that event actually happened it 1947 in Lubbock, Texas, but facts are very sketchy on that event). It would be a 200 lap race, which became a very common distance for future IMCA stock car races and when the dust had settled, it would be Bob McKim of Salina, Kansas as the victor in the race. Other competitors included future IMCA promoter Frank Winkley.

By 1950 a pattern had been established at Topeka, the Stock Cars running on Memorial Day and the 4th of July and for some years once or twice during the fair, and the Big Cars making an occasional mid year stop at Topeka but usually running at least two events during the fair. 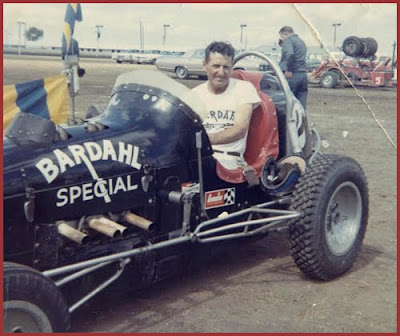 Over the next few years legendary drivers such as Frank Luptow, Emory Collins, Bobby Grim and Pete Folse would wheel their cars into victory lane at Topeka in Big Car action.

Grim would put the legendary Hector Honore Offy in victory lane six times and Folse would sweep both shows each year at Topeka in 1959, '60 and '61 aboard the legendary Black Deuce.

Other IMCA winners over the year would include Jim Moughan (2), Bill Puterbaugh (2), Jay Woodside, a sweep of both shows in '66, Jerry Blundy would be a three time winner and on September 7, 1975 in the last IMCA race at Topeka it would be Ralph Parkinson, Jr. who closed out 30 years of IMCA action at the fairgrounds.

The IMCA stock cars would also put on some classic battles at Topeka many times over the course of 200 lap features especially during their annual stops on Memorial Day and Independence Day. Topeka’s own Bill Harrison took to the track in the early 50’s and would score 4 wins there. Herschel Buchanan would switch from Big Cars to Stock Cars and win there 3 times in stock cars. Don White would visit Topeka’s victory lane 5 times before heading for USAC. 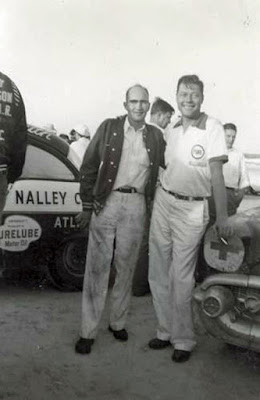 In 1956 The Harlan, Iowa duo of driver Johnny Beauchamp and crew chief Dale Swanson stormed to the top of the IMCA Stock Car standings and it was Beauchamp visiting Topeka’s hallowed victory lane on all three Stock car stops that year. He would add two more victories in 1957, sharing honors with Omaha’s Bob Burdick, who would win in '57 and twice more in '58. Dick Hutcherson would win in '62 and again in '64. All three drivers would try their hand at NASCAR and win at least one Cup race during their NASCAR careers.

But if there was one driver who is synonymous with IMCA Stock Car racing it is the little giant from Keokuk, Iowa, Ernie Derr. Not only did Derr shatter all IMCA record books with an incredible 328 wins and 12 championships, he did so as well at Topeka winning an unbelievable 17 times winning the annual 4th of July race 9 times. 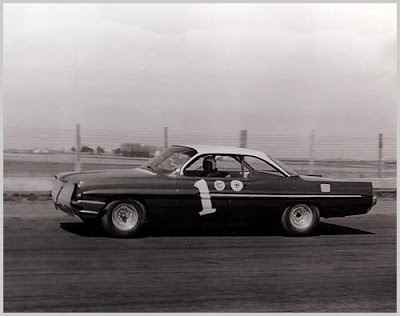 The 4th of July race was sometimes run as an International race, which meant that sports cars could run with the stock cars. Such was the case in 1958 when Omaha’s Loyal Katskee brought his beautiful red Ferrari home third behind Bob Burdick and Don White.


Dale Swanson Jr. remembers the July 4, 1956 race well. “Johnny Beauchamp (with Dale Swanson Sr. as crew chief) had won an afternoon-evening doubleheader in Jamestown, North Dakota, the day before,” recalls Swanson. “My dad’s cousin, Russell Smith and I met Beauchamp and dad in Columbus, Nebraska and then Russell finished the drive to Topeka. We were late because dad had worked on the car after the Jamestown race and made it just in time.”

“The Dodge Dealers of Topeka had put up a $500 bonus if a Dodge won the race,” continues Swanson Jr. “Johnny built up a huge lead during the race but close to the end of the race a Dodge driver put Johnny through the number two turn fence and into a tree. They got the car back to the pits and we checked it out, and Johnny was still able to win the race. When it was over we found that the right front motor mount was broken off and the motor was riding on the fuel pump and cross member. Fortunately we used to solder copper tubing rings to the radiator so if the fan hit the radiator it would skid on the rings and nut cut the tubes and drain out the water. The fan was running on those skid rings at the end of the race.”

During its heyday crowds at the Mid-America Fairgrounds would be in the 14 to 15 thousand range with crowds starting to drop off as the interstate system was developed and fans found more and more different types of entertainment.

In 1983 they tore out the famed half mile track and today it is the home of the Kansas Expo Center.