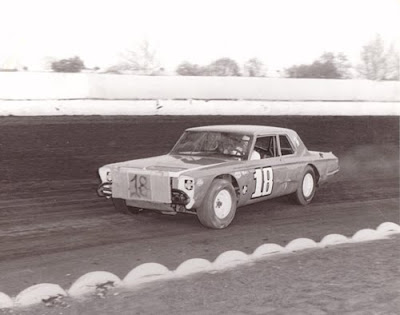 Harlan, Iowa (July 28, 1969) - Lem Blankenship of Keokuk, Iowa withstood the challenge of 17 of the better drivers in the Midwest to win the Centennial 100 at the Shelby County Speedway.
Blankenship led the race for 95 laps, picking up a total of $495 for the victory. Swanson Automotive of Harlan contributed $100 lap money for the race.
A crowd of 3,306 turned out despite the threat of rain with 37 drivers competing for a $2,100 total purse.
Blankenship took the lead on the fourth circuit and held it for 16 hectic laps. Blankenship dueled with Bill Wrich, Jim Gawley, George Barton and Bill Moyer.
Wrich actually took the lead away from Blankenship on the 20th and 21st laps only to lose it again. Wrich left the race on the 35th lap with mechanical problems and didn't get back in until the midway point of the race.
Barton, of Boone, finished second to Blankenship with Harlan's Don Christensen finishing third. Christensen car, owned by Orv Roecker Ford, was a questionable entrant but was ready to go at the last minute and ran extremely well.
Barton collected $225 for second while Christensen earned $150. Milo Stodola of Fremont, Neb., collected $125 for his fourth place finish and fifth place money went to the "Flying Tiger" Red Rollins of Carson, Iowa with $90.
The $2,000 purse plus the $100 lap money was the highest ever guaranteed at Harlan and in west central Iowa history.