Remembering the Mile at Sedalia Ramo Stott of Keokuk, Iowa was a frequent winner on the one-mile dirt at the Missouri State Fairgrounds in Sedalia, Mo. - Kyle Ealy Collection
by Lee Ackerman
OMAHA, Neb. — One of the most interesting venues for racing in the Midwest during the ’50s, ’60s and ’70s was the Mile track at the Missouri State Fairgrounds in Sedalia. Racing was held on both the half-mile and the mile, but the mile provided for a different, longer and faster track than most of the competitors were used to.
The old International Motor Contest Association held its first event for Stock Cars on the mile at Sedalia on July 4, 1951, when Des Moines, Iowa’s Chris Skadal won the 100-lap feature event. Later that year on August 25, during the Missouri State Fair, Springfield, Mo.’s Chug Montgomery took his No. 37 Oldsmobile to victory lane in a 25-lap event.

Over the next few years several drivers were victorious on the mile at Sedalia in IMCA Stock Cars. Dominic “Shorty” Perlick won in 1952 in his Oldsmobile on his way to winning the 1952 IMCA Stock Car Championship. Topeka’s Wild Bill Harrison won in 1953 in a Hudson and then won again in 1955 in an Oldsmobile. Jim Ward won in 1954 in a Hudson.
In 1956, the largest crowd ever to attend any attraction in the history of the Missouri State Fair, over 18,000 fans watched as Avondale, Mo.’s R.G. “Shorty” Eberts wheeled his 1956 Ford to victory lane in the 100-mile affair. Eberts assumed the lead when IMCA superstar Don White was forced from the race on the 97th lap because his Dodge had lost most of its oil. Earlier, White had shattered Jim Ward’s record of 50 seconds flat in qualifying when he turned a lap of 47.33 seconds. Ebert’s set a new record in running the 100 miles in 1 hour 23 minutes 19.48 seconds.
The next year, Bob Burdick of Omaha destroyed White’s track record with a lap of 45.78 second and then went on to win the 100-mile event defeating Ernie Derr before a new record crowd at the Missouri State Fair of 20,503. The year of 1958 proved to be a very interesting year in the history of the race. Omaha’s Loyal Katskee driving his 4.4 liter Ferrari set a new track record of 45.58 seconds in qualifying.

In the 100-lap feature, before yet another record crowd of more than 22,000 fans, Katskee held on to win the feature over Don White by a car-length after White was forced to pit with 17 laps to go with a rubbing fender. Katskee’s Ferrari was allowed to compete as the race was one of IMCA’s International Races that allowed foreign made cars to compete.
In 1959, drivers from Keokuk, Iowa, started taking over the mile at Sedalia, just as they did with most venues on the IMCA schedule. Ernie Derr, who would win an astonishing 12 IMCA Stock Car Championships and 328 feature victories, would set fast time and go on to win the 100 miler before more than 23,000 fans at the Missouri State Fair. It would be the first of three wins on the mile for Derr.
In 1960, Keokuk drivers would dominate the action with Derr setting a new track record of 43.91 seconds in qualifying and in the feature it was a one-two-three Keokuk finish with Ramo Stott winning over Dick Hutcherson and Derr. The crowd for the race dropped back to ONLY 22,000 fans.
Sycamore, Illinois’s Paul Burrow would win in 1961 driving his No. 98 Ford, but then the “Keokuk Connection” took over with Dick Hutcherson winning in ’62, ’63, and ’64 before he left for NASCAR. Ramo Stott would then win three in a row, ’65, ’66, and ’67. Hutcherson would defeat Ernie Derr in 1962 with pit stops making the difference. In 1963, Stott would set a new record of 41.62 second in qualifying, but Hutcherson would once again take home the gold as he guided his yellow No. 3 Ford to the win over Ernie Derr. Hutcherson would best Stott in 1964 to make it three in a row.
Ramo Stott would then start his own streak of three wins in a row. Finally in 1968, the Keokuk streak was broken when Lenny Funk, the “Kansas Wheat Farmer” took his Ford to victory lane. Ernie Derr would put Keokuk back in the winner’s circle in 1969. In 1970, it was Fred Horn of Marion, Iowa. setting fast time and then holding off a trio of Keokuk drivers in Ron Hutcherson, Mike Derr and Gordon Blankenship for the win. 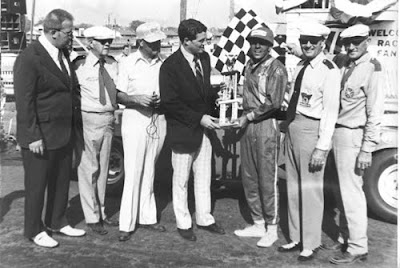 In 1971, Ernie Derr set a new track record of 39.67 seconds in qualifying and then went on to win the 100-mile event over his son, Mike. Fred Horn returned to victory lane in 1972. On August 25, 1973, a new Derr appeared in victory lane as Ernie’s son, Mike, claimed a 101-lap feature win on the mile in 1 hour 11 minutes 15.33 second in defeating Missouri short track legend Larry Phillips. That evening Topeka’s Gerry Harrison piloted his No. 98 Monte Carlo to a 25-lap win on the mile.
IMCA did not hold any Stock Car races at Sedalia in 1974, but returned in 1975 with Mike Derr winning the 100 lapper in his Charger. Kansas City’s Super Joe Wallace would win the 1976 event, with Lampe, Mo.’s Ferris Collier winning in 1977, which would be the last year of the old IMCA circuit.