The United States Auto Club and the Bulldog 150 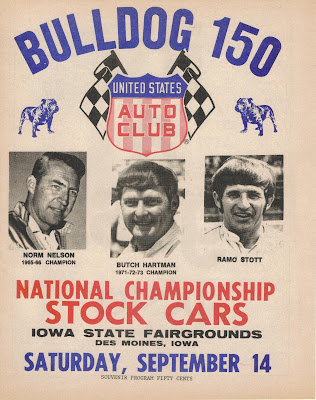 A souvenir program from the 1974 USAC-sanctioned Bulldog 150 at the Iowa State Fairgrounds. - Photo courtesy of Lee Ackerman

by Lee Ackerman
Omaha, Neb. - The half mile at the Iowa State Fairgrounds in Des Moines has played host to a multitude of different type racing events throughout its long and glorious history. For two years in 1974 and again in 1975 it hosted the Stock Cars of the United States Auto Club in a race called the Bulldog 150.

On September 14, 1974 Jack Housby and Ventures Ltd. brought the USAC Stock Cars to the Iowa State Fairgrounds for the inaugural running of the Bulldog 150. Leading up to the 1974 the list of champions of the USAC Stock Car division read like a who’s who of racing; Fred Lorenzen, Paul Goldsmith, Norm Nelson, Don White, Parnelli Jones, A. J. Foyt, Roger McCluskey and three time and defending champion Butch Hartman.

The September 14 race in Des Moines would be the last race of the 1974 stock car season and saw Norm Nelson leading defending champion Butch Hartman by just 30 points in the championship chase. The Bulldog 150 would decide the 1974 USAC Stock Car Championship. Coming into the 1974 season, Nelson who had returned to action in the middle of the 1973 after a layoff of 18 months because of back injuries, and Hartman were the series only three time winners.

A crowd estimated at 6,500 fans showed up on race day. They didn’t have to wait long to cheer a home state driver as Keokuk’s Dick Hutcherson set fast time in the Jack Housby #02 with a lap of 25.54 seconds. Butch Hartman won the trophy dash and Davenport, Iowa’s Terry Ryan won the 10 lap consolation to finish setting the 24 car feature for the Bulldog 150. 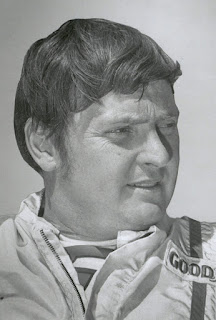 Butch Hartman won the USAC-sanctioned  Bulldog 150 at the Iowa State Fairgrounds on September 14, 1974.

Fast Qualifier Dick Hutcherson would lead 42 laps, another Keokuk driver Ramo Stott (who was driving with first and second degree burns he had received on his hands the previous Sunday in a racing accident at Milwaukee) would lead the most laps, 57 in the Jack Housby #2 before cutting a tire when he ran over a piece of exhaust pipe. A third Iowan, Irv Janey would also lead for a few laps. But it was Butch Hartman, who picked up the lead on lap 107 and went on to win take the win and the lion’s share of the $16,650 purse. The race took 1 hour 8 minutes and 48 seconds. There was only 1 caution for 5 laps.

The second annual Bulldog 150 took place on July 3, 1975 and saw a large crowd show up to see 30 cars attempt to qualify for the race. For the second straight year a driver from Keokuk, Iowa set fast time. This time it was Gordon Blankenship behind the wheel of his own #17 Plymouth. Blankenship tripped the clocks at 26.36 seconds. Iowa veteran Darrell Dake won the 4 lap trophy dash and Deerfield, Illinois’ Bay Darnell won the 15 lap last chance race.

At the start pole sitter Blankenship led for three laps before surrendering the lead to Dake in the Marty Sixt #78. Dake then led for 107 laps and looked like he was on the way to victory lane when he shredded a tire and had to make an unscheduled pit stop. The Cedar Rapids veteran would make a second pit stop with just nine laps to go that would and would finish fifth. Wily Iowa veteran Ernie Derr assumed the lead in his own #23 Dodge and would never relinquish it. Derr would go on to pick up the winners’ share of the $13,750 purse.

Four time and defending USAC Stock Car champion and current point leader Butch Hartman was running second when he was forced out on lap 125. The DNF would hurt him in his quest to win a fifth straight championship and Ramo Stott would ultimately win the 1975 USAC Stock Championship. 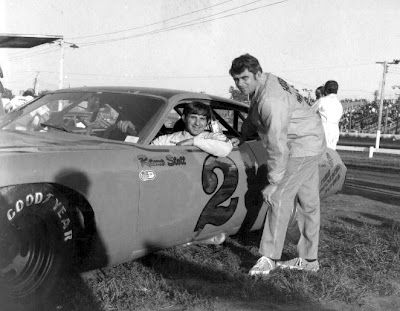 Following Derr to the checkered flag was Stott in the Housby #3 with Jack Bowsher third, Don White fourth and Darrell Dake fifth. Hawkeye drivers had once again had a banner day in USAC Stock Car racing taking four of the top five stops.