Frank Winkley’s Marathon on Dirt; The Great Gopher 500 and Hawkeye 500 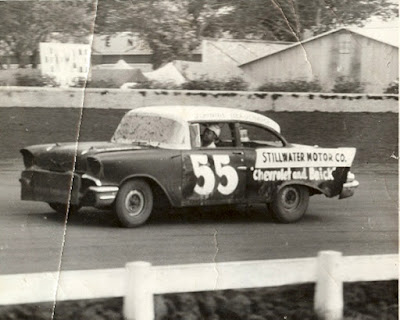 by Lee Ackerman
Omaha, Neb. - In 1956 Frank Winkley’s Auto Racing, Inc., one of the two promotion groups for the International Motor Contest Association announced a blockbuster event to be held on the half-mile dirt track at the Minnesota State Fairgrounds for Sunday, September 30, 1956. The event would be called the “Great Gopher 500” and would feature 500 laps of competition split into two 250-lap events. Time trials would be held on the 29th for a shot at the 33-car starting lineup. Both foreign and American cars were allowed to compete.

A group of St. Paul businessmen called Midwest Sports Promotions joined with Winkley and his ARI group to lease the track and provided for the first racing at the facility held outside of state fair races in nine years. The purse was set at $10,000 for the event, with the maximum amount to be earned by any one driver set at $2,000. Reserved seating was priced at $3 with boxes being $4.

A crowd of 28,312 fans (The Daytona Beach race in 1956 drew an estimated crowd of 29,000) actually saw three separate winners on race day. Don White of Keokuk, Iowa, the defending I.M.C.A. champion, was the overall winner of the 500-lap affair by posting fifth and third place finishes in the two 250-lap races. Minneapolis driver Charles Magnuson was runner-up overall with a pair of four place finishes.

Johnnie Beauchamp of Harlan, Iowa, who would dominate the 1956 I.M.C.A season, set five new I.M.C.A records in winning the first segment in an average speed of 61 miles per hour. Marvin Panch of Gardena, California passed Beauchamp on lap 62 of the second segment and went on to win that event. Beauchamp looked like a certain overall winner as he remained in second place until he was forced to retire with a blown piston.

Beauchamp, who won set new I.M.C.A. marks at 50, 100, 150, 200 and 250 laps in the first event, won that event in a time of 2 hours 3 minutes 13.12 seconds. Panch would take 2 hours 10 minutes 13.99 seconds in winning the second 250 lap event. Chevrolet and Ford shared the honors as Beauchamp was in his familiar #55 Swanson Chevy and Panch was driving a Ford. If there was a tiebreaker it would go to Chevrolet, as Don White who had started the year in a Dodge was also driving a Chevrolet. 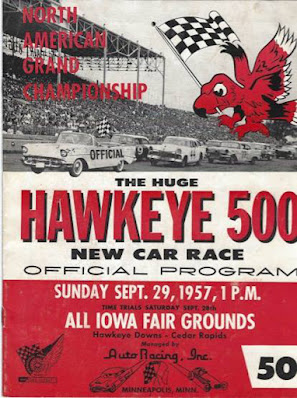 Frank Winkley liked the success that he had with the Gopher 500 so well, that one year later on Sunday, September 29, 1957, he decided to have another 500-lap marathon. This time it was to be one race of 500 laps to be called the Hawkeye 500 and was held at Hawkeye Downs on the All-Iowa Fairgrounds in Cedar Rapids, Iowa.

Once again qualifications were held on the Saturday preceding the race and Johnny Beauchamp put his #55 Dale Swanson wrenched Chevrolet on the pole. A field of 33 cars would once again contest the event but this time in one segment. As had happened the previous year, several outsiders showed up for the event including Lou Fegers of Glenview, Illinois, Red Duvall of Hammond, Indiana, Dave Hirschfield, Bill Brown, Pete Peterson and Fred Hoff, all of Chicago, Don Oldenberg of Highland, Indiana and Bill Lutz of Louisville, Kentucky.

After 13 lead changes which saw Beauchamp, Don White, Bill Brown, and Dave Hirschfield all take turns at the front, and 4 hours 26 minutes 55.37 seconds, it was Beauchamp taking the checkered flag. Bill Brown set a new 150-mile record while Beauchamp set 200- and 250-mile marks. Ten yellow flags slowed the race which included three serious pileups. The last of these pileups included the then second running Brown when on lap 371 he drove over the west retaining wall. Fortunately, he suffered only a bruised shoulder.

Several favorites left the race with problems, starting with Omaha’s Bob Burdick after only 19 laps with motor problems in his new motor. I.M.C.A contender Lenny Funk blew an engine while in third place on lap 26. Dave Hirschfield also had engine problems on lap 41 shortly after relinquishing the lead to Beauchamp.

Despite stiff competition from drivers outside I.M.C.A., regulars would take the first eight positions, with the first five drivers all being from the Hawkeye State. The top five were Beauchamp, Don White, Chub Liebe, Frank Richards and Ernie Derr. Beauchamp received $2000 for his win and $200 for being the fastest qualifier. A crowd of nearly 10,000 was on hand at Hawkeye Downs for the event.

While the I.M.C.A would hold 200 lap and longer events for the coming years, this would be the only two events of 500 laps that they would contest on the dirt. 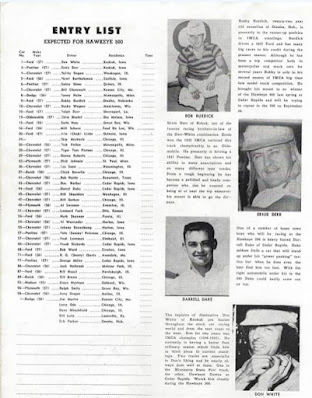