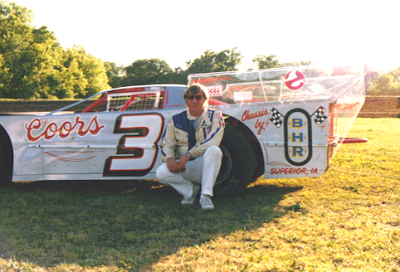 Omaha, Neb. - For the 1983 racing season, some tracks in the Midwest in an attempt to limit the cost of racing did away with the regular late models and instead elected to run a Sportsman type class as its feature class. In response to this the American Outlaw Stock Car Organization (AOSCO) was founded to give the regular late models a place to race.

The opener was set for April 16 in Webster City but was rained out. On June 12 the season got underway at Harlan with the preliminary events with heats going to Steve Kosiski, Bob Hill and Billy Moyer and position races going to Joe and Steve Kosiski. Unfortunately the June 13 races were rained out.

On Sunday, May 15 action finally got underway at Webster City. Steve Kosiski and Bob Shryock won the heats. In the feature, Joe Kosiski inherited the lead when leaders Bob Shryock retired with mechanical problems and Steve Kosiski dropped from the event with tire problems. Joe held on to win the race followed by Gary Hopp, Mike Smith, Willy Kraft and Dwaine Hanson both of Lakefield, Minnesota.

On May 28 after yet another rainout, Webster City completed its second show and Al Urhammer of Radcliffe was the feature winner. Heats went to Urhammer and Mike Smith and Smith was really the only car who could stay with Urhammer in the feature. Following Urhammer and Smith was Gary Pederson, Bill Christman and Bill Martin.

Finally the next weekend the weatherman cooperated and the series held three events. On Friday night at Harlan the May 13 show was made up. The B feature was completed but not before half the field fell by the wayside. Bill Kirk picked up the win over Terry Holliman. In the feature, Steve and Joe Kosiski were at the head of the pack at the start but were both passed by Bob Shryock and Billy Moyer. Shryock and Moyer then waged a war for the top spot until Moyer went pitside with a flat tire. Shryock then held off Joe Kosiski for the win and a $1,500 payday. Willy Kraft, Steve Kosiski and Gary Hopp rounded out the top 5.

The next night it was back to Webster City where heats went to Al Urhammer, Steve Kosiski and Gary Hopp. In the feature it was pretty much all Steve Kosiski. Several contenders were eliminated in accidents including Gary Hopp and Don Hoffman. Shryock would finish second, Willy Kraft third followed by Urhammer and Dwaine Hanson.

The weekend came to a conclusion with the first stop of the year at Buena Vista County Speedway in Alta where Craig Jacobs of Des Moines and Bob Shryock picked up heat wins. In the feature it looked like all Shryock but on lap 17 Shryock retired with rear end problems and Jacobs inherited the lead and went on to win his first AOSCO feature of the year. Following Jacobs was Joe Kosiski, Steve Kosiski, Wisconsin’s Les Duellman and Omaha’s Keith Leithoff.

After a couple more weeks of rainouts, action resumed again at Webster City. Heats went to Mike Smith, Don Hoffman and Steve Kosiski. At the drop of the green it was all Don Hoffman of Des Moines and he led wire to wire in the feature. Following Hoffman were Mike Smith, Craig Jacobs, Steve Kosiski and Willy Kraft.

On the July 4th weekend another three day swing from Harlan to Webster City to Alta was planned but unfortunately mother nature raised her head again and only the Harlan show was ran as scheduled. 33 late models showed up to kick off the weekend with heats going to Pete Parker of Kaukauna, Wisconsin, Joe Kosiski, Don Hoffman and Bill Martin of Council Bluffs. Craig Jacobs won the B. Joe Kosiski debuting a new car not only led every lap in his heat but every lap in the feature. Behind him Hoffman and Moyer waged a battle for second with Hoffman winning out and Shryock making a late race pass of Parker for fourth.

Webster City finally got another race in the following Saturday with Craig Jacobs and Willy Kraft winning heats. Kraft then grabbed the lead at the outset of the feature and was never headed winning his first AOSCO feature of the season. Jacobs, Shryock, Hoffman and Randy Rosenboom followed. 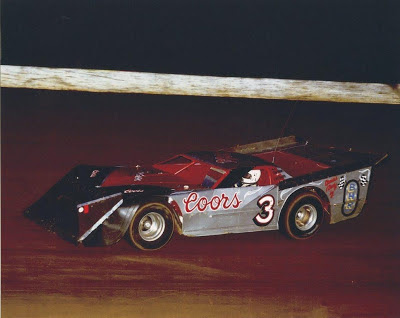 
The following week with several of the top drivers at the NDRA Super Nationals at I-70 Speedway, Frank Jorgensen of Carroll and Bill Davis of Des Moines won heats at Webster City. In the feature Mike Smith picked up his first AOSCO feature win of the year by passing Bill Davis for the lead. Davis held on for second with Jorgensen third, Gary Hopp fourth and Wayne Larson fifth.

The Hamilton County Fair Board announced about this time that the Racing Committee of the Fair Board would take over promoting the races with Butch Weber as the track manager. Steve White of Des Moines who had promoted at Webster City since the beginning of the 1982 season stepped down as the promoter.

July 22nd saw the series return to Harlan for the Shelby County Fair races and it looked like veteran Omaha driver Keith Leithoff would upset the field, but with five laps to go Leithoff’s engine expired and Billy Moyer took over the point and went on to win the event. Dave Chase, Jerry Wancewicz, Willy Kraft and the ageless Glen Robey rounded out the top five. Heats went to Wancewicz, Leithoff and Moyer.

The next night at Minnesotan Dick Sorensen showed up at the Hamilton County Fairgrounds in Webster City and won by his heat and the feature. Bill Davis won the other heat. Bill Davis, Jerry Wancewicz, Dave Chase and Terry Buresh followed Sorensen home in the feature.

July 30 produced a new winner at Webster City. Tom Hearst of Wilton made his first tow to the Hamilton County Fairgrounds in several years a profitable one. Hearst won both his heat and the feature. Bob Shryock the other heat winner stayed close to Hearst but could not catch him. Shryock did however pick up the AOSCO points lead from Joe Kosiski who was not in attendance. Wancewicz, Davis and Jacobs rounded out the top 5.

The next week featured two nights of racing at Webster City. First on Wednesday, August 3, young Bobby Jackson upset the veterans and won his first AOSCO feature. Jackson had to start in the third row after finishing third to Bob Shryock and Bill Davis in the first heat. The veteran Shryock led the first 16 laps working the low groove. Jackson, meantime found something up high and took the lead on lap 17. Shryock fought back and they were side by side at the white flag but Jackson held on for the win. Willy Kraft finished third, Jerry Wancewicz fourth and Jerry Holtkamp fifth. Les Duellman won the second heat.

The next night it was the Buena Vista County Fair races at Alta. Heats went to Willy Kraft and Jerry Wancewicz. Joe Kosiski and Craig Jacobs won the cash dashes. In the feature Joe Kosiski simply left the field lapping all but three cars in winning the event. Only Jacobs in second and Shryock in third remained on the lead lap. Will Kraft finished fourth and Bob McCoy fifth.

On Saturday night it was back to Webster City where the big winner was Don Hoffman.
Hoffman and Jerry Holtkamp won the heats. Hoffman jumped into the lead at the drop of the green and led wire to wire. Mr. Consistency Bob Shryock finished second with Wancewicz, Holtkamp and Gary Hopp rounding out the top 5.

On August 13, Mike Smith returned to the winner’s circle charging from the third row and taking the lead midway through the feature from early leader Don Hoffman. Hoffman held on for second with Shryock, Kraft and Bruce Busho completing the top 5. Heats went to Dick Sorensen and Bill Davis.

A big field of late models showed up on Tuesday, August 16 at the Iowa State Fair in Des Moines. The feature was a dandy and the trophy and the $1,200 winner’s check would stay in Des Moines as Don Hoffman got by Tom Hearst on lap 11 and then got by Billy Moyer on the final turn to take the victory. Following those two were Joe Kosiski, Johnny Johnson of Morning Sun and Jerry Wancewicz. Heats went to Rick Wages of East Moline, Illinois, Jim Jorgensen of Omaha, Bill Davis and Tom Hearst.

The feature which had been delayed for more than once for rain showers saw Willy Kraft take the lead as Steve Kosiski faded and was replaced in second by brother Joe. Joe took the lead about a third of the way and led through numerous restarts. On lap 35 the yellow came out for another car. On the restart not knowing Joe Kosiski restarted with a flat tire and caused a big pile up. After much controversy and arguing, Joe was put to the back and Willy Kraft was given the led which he held for the remainder of the race. Mike Smith guided his damaged car to second with Joe Kosiski coming all the way up to third. Keith Leithoff and Jerry Wancewicz rounded out the top 5.

At seasons end, Bob Shryock of Estherville, Iowa set atop the point standing. He was followed by Mike Smith, Joe Kosiski, Willy Kraft and Craig Jacobs. Fifty nine different drivers competed in the series throughout the year. The series had proved late model drivers a place to race and given the fans a chance to cheer for their favorite late model drivers.