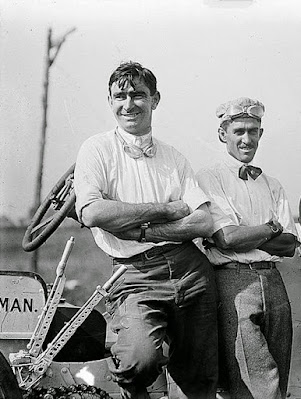 Omaha, Neb. - 1915 was the first year of the International Motor Contest Association (IMCA) and the series would visit the Iowa State Fairgrounds on September 3, 1915, with Indianapolis driver Louis Disbrow taking home the win. Disbrow was a veteran of the first four Indianapolis 500’s and won many races across the country during his career.

On August 16, 1916, IMCA returned to the Iowa State Fairgrounds, and it turned out to be a dandy of a race. Fred Horey (future IMCA Champion in 1925 and 1926, the IMCA did not crown a champion until 1925) driving a Fiat would hold on for the win but just barely over Wild Bill Endicott (a three-time Indy 500 participant) in the Sweeney Special. Endicott would push Horey hard the last lap but to no avail.

The first 40 laps, the driver pushing Horey was George Clark in his Case, but disaster struck Clark when his right rear tire exploded sending him pit side. Despite losing 2.5 laps in the pits, Clark came back to finish third. Following Horey, Endicott and Clark to the line were Dave Koetzla in a Case, Juddy Kilpatrick in a Briscoe, LeCorq in a Briscoe, Striedel in a Stafford, and Fred Woodbury in a Duesenberg.

On September 1, 1916, George Clark overcame muddy track conditions to avenge his earlier fate and average 50 miles per hour in winning the International Race for Champions. His time was 30 minute and 9.1 seconds. His victory was due to the engine problems suffered by Fred Horey and Bill Endicott. Horey and Endicott dominated the first 35 laps passing each other at least five times before Endicott retired from the race on lap 39. One lap later Horey was gone from the race.

LeCocq, a former Des Moines resident took the lead but surrendered it to Clark on lap 43 who lead the rest of the way. In a two-mile dash between Clark, Endicott and Horey, Endicott would take the win with Clark second. 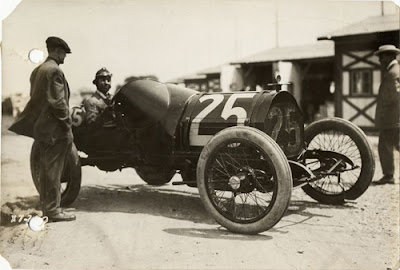 In 1917, IMCA returned to the Iowa State Fairgrounds for two races in August. On August 24, it was George Clark breaking the world record for 25 miles or 50 laps when he toured the half-mile in 29 minutes 43.20 seconds. The record could have been even lower if race leader Ray Lampkin had not suffered a flat tire on lap 31. Lampkin had a 300-yard lead at the time of his flat. Lampkin returned to the fray and finish third with Ben Giroux fourth and Rathburn fifth.

Fred Horey a winner the previous year dropped out on lap 41 with engine trouble, but he was never a factor.

On August 31, the fans at the Iowa State Fairgrounds were treated to a new world record and the near breaking of two necks all in one afternoon giving race fans ample thrills during the three-hour show.

The 25-mile race proved to be one of the best ever held at the Fairgrounds. Ray Lampkin, who lost a similar contest a week earlier to George Clark because of a flat tire turned the tables on Clark. Lampkin not only won the race but also took three seconds off the world record when he completed the 50 laps in 29 minutes and 40 seconds. Lampkin and Clark were both forced to pit during the race, Lampkin on lap 5 and Clark on lap 37. Clark’s slow pit stop was all Lampkin needed to take the lead and go on to win. Giroux would finish second and Clark third.

The other excitement of the day occurred on lap three when Rathburn’s Du Chesneau went throw the infield fence at the west end of the track. The second occurred on lap 41 at the opposite end of the track when Bowen’s Mercer spun and came to a stop. The spin sent mechanic Fred Wiley 10 feet into the air and Floyd Bowens went flying when the car turned over. Both were taken to the hospital with broken noses and a few bruises.

The IMCA would remain a stable of auto racing at the Iowa State Fairgrounds, especially during the Iowa State Fair until the demise of the original IMCA in 1977. The series with both Big Cars and Stock Cars would annually play to a sold-out grandstand and provide Iowa’s racing fans with some of the best racing in the country. 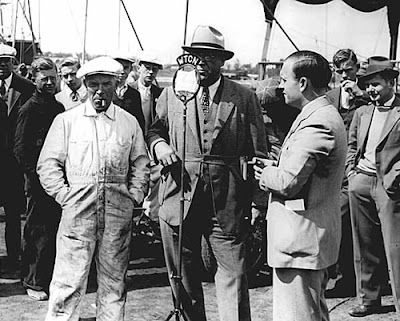 J. Alex Sloan was considered the father of auto racing in Iowa and the Midwest. He spearheaded the International Motor Contest Association.