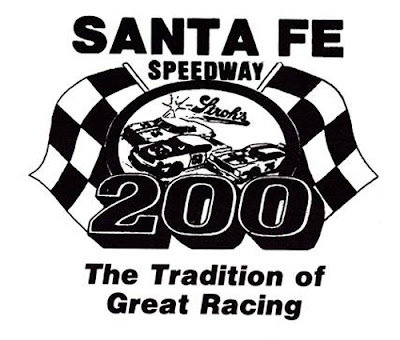 by Lee Ackerman
Hinsdale, Ill. - It’s a housing development now, and like so many dirt tracks across America it has faded into a memory, but for over 40 years 91st Street and Wolf Road in the Chicago suburb of Hinsdale was the site of one the most famous dirt tracks in America, Santa Fe Speedway. Actually the history of Santa Fe Speedway goes back to 1896 when Frederick Tiedt built and operated a multi-purpose facility which included in addition to a race track, a dance hall, beer garden, bowling alley and other refreshment stands. The original facility was destroyed by a tornado in the 1920’s.


In 1953, ’s son Howard established Santa Fe Park Enterprises, Inc and built the Santa Fe Speedway that most race fans are familiar with. There were actually two tracks, a quarter-mile track and one that was a 7/16th mile facility. From 1953 through 1995, Santa Fe Speedway would provide area fans with one of the most versatile racing programs in the county.


In 1953 Santa Fe hosted three 200-lap feature races, one of which was the inaugural running of the National Clay Track Championship. ’ Fred Kasten won the first NCTC driving a Buick.  Bill Van Allen won the second NCTC in 1954 at 300 laps. Van Allen would win the NCTC a total of five times to add to his impressive list of six track championships. After several years at 300 laps the event was cut to 100 laps in 1958 before the race was changed to 200 laps (for the reminder of its existence) in 1962. 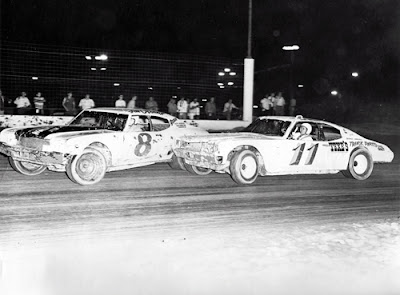 
By the 70’s a new generation of drivers was moving to the forefront at Santa Fe Speedway and they would be major factors in the NCTC race. Arnie Gardner of never won a late model championship at but he was extremely tough in the NCTC winning the event four times. Kankakee’s Jim O’Connor won the track championship three times in the 70’s and added four NCTC wins. When asked about setting up his car for such a long race, O’Connor said, “We went through the whole car the night before. The day of the race we took power away from car as the track got very slick and you didn’t need as much power. We put on a different carburetor and took some gear out.” 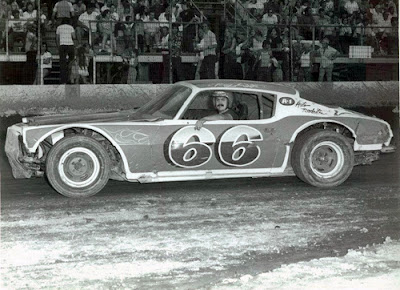 
At 200 laps they would run 100 laps then stop all the drivers on the front stretch and the crews would have 8 minutes to refuel, change tires, and make changes or fix what ever needed to be fixed on the cars. Then they would fire them up and run the second 100 laps. While the race started as a local event in the later years when it started paying $10,000 or more to win regional and national drivers started showing up.


Arnie Gardner won the third of his four NCTC titles in 1981 when he used the patented “Santa Fe Bump” to pass Brian Leslie on lap 91. A lead he never relinquished. In 1982 Leslie who had moved from Illinois to Tupelo, Mississippi, returned with a vengeance. It also didn’t hurt that he brought along a new Ray Callahan Bullitt Race Car. After setting fast time, Leslie led the entire 200 laps followed by Izzo. 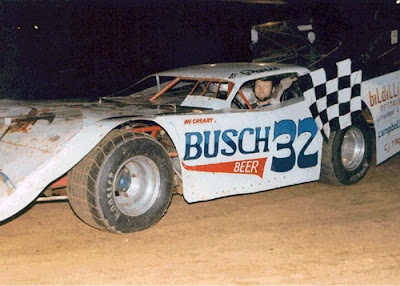 
1984 saw the field include a pair of hot shoes in Gary Webb and Roger Dolan. Also in the field was a down state driver who would go onto national prominence in ’s “Tall Cool One” Bob Pierce. Tony Izzo would set fast time with a lap of 18.467 seconds with Pierce qualifying second. Jim O’Connor and Tony Izzo would start on the front row as a result of winning preliminary 25-lap features.


O’Connor jumped to the lead until lap 9 when Izzo took over the front spot. Izzo would continue to lead until lap 63 when Pierce made the pass for the lead. On lap 75 it was Izzo back to the lead. The last 25 laps of the first segment saw positions change back and forth and at the break it was O’Connor at the point followed by Pierce. Pierce passed O’Connor on lap 113. By lap 130 John Provenzano had moved into second and would pressure Pierce the rest of the way, but “the Tall Cool One” held on for the win with Provenzano settling for second.
The NCTC race that seems to be remembered the most by race fans was in 1990. The field included pole sitter and winner of the previous nights “Silver Crown 50”, Chargin’ Charlie Swartz of , , Bob Pierce, Ronnie Johnson of , and ’s Joe Kosiski. At the start 1990 point champion Bob Pohlman Jr. got the jump on Swartz and pulled away. On lap 50 Provenzano spun brining out the yellow with only 7 cars on the lead lap. On lap 64, Provenzano experienced transmission problems and coasted to a near stand still on the back stretch. An 18 car pile-up resulted on the backstretch taking out most of the front runners and bringing out a red flag. 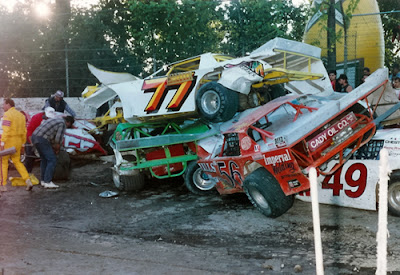 "The Big One" occurred at the 1990 National Clay Track Championships. - Stan Kalwasinski Photo


A long delay ensued as the safety crews pulled cars apart and got things back in order. The race would resume based on the running order at the end of lap 63. The mandatory break at lap 100 would also be eliminated as the teams had plenty of time during the red flag conditions to make the necessary adjustments. Due to the lengthy delay, Provenzano was able to replace his transmission and enter the race in second place.


Swartz led a slimmed down field to the green, but it didn’t take Provenzano long and he passed Swartz for the lead. Pierce would soon get by Swartz for second and challenge Provenzano put Pierce’s car torn up from the big wreck wasn’t good enough to pass Provenzano, who picked up his third “200” win in four years. Provenzano and Pierce ended up being the only cars on the lead lap.

In 1991, arguably the best dirt late model driver of that era, Billy Moyer showed up at to try his hand at the 200. Track veterans Jim O’Connor and John Provenzano would share the front row with Provenzano jumping to the lead only to be passed on lap 8 by Larry Jackson. Izzo then assumed the point with reassuming the lead on lap 19. Izzo went back to front on lap 35 but the man on the move was Billy Moyer of . Moyer grabbed the top spot on lap 62 and would go on to pick up the win and $13,000 for his efforts. NCTS mainstay Provenzano would finish second. That year the field included Peter Parker, who finished third, Gary Webb, Joe Kosiski and Willy Kraft.


1993 saw the always tough Provenzano set a new track record with a lap of 17.174 seconds and started on the pole. But before the first lap was in the book, ’s Gibby Steinhaus had the lead from his outside starting position. Steinhaus and ’s Dick Taylor would swap the lead a couple of times before excited the race on lap 29. The next lap, “the Modern Day Cowboy” John Gill passed Steinhaus for the lead and never looked back. The race was cut short to 160 laps by rain.
John Gill remembers how he got the advantage early on in the race and how it was taken away during the mandatory lap 100 stop. “The track was really slick, but there was one dry spot coming high out of four where I could get traction and really fly down the front straight.” During the break he heard a “varoom” in turn four and turned to see an earth mover removing the dry spot. “I guess they thought they were evening up the odds.” Gill commented.


The 1994 race was run under threatening skies that had wiped out the previous nights Silver Crown 50 for the third year in a row. Nick Knipers Jr set fast time and led until Kevin Roderick took the top spot. Soon the race would be a battle between Roderick and Bob Pohlman Jr. By lap 70 Provenzano had joined the battle. Rain started to fall near the end of the first segment and the race was stopped for the mandatory pit stop on lap 102. 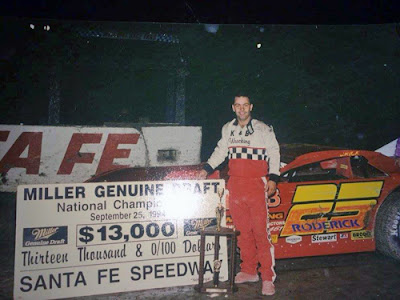 
During the break the rain subsided and the race was resumed with Provenzano at the point. Tom Pauley challenged “Little John” but after awhile Provenzano started to pull away and Roderick passed Pauley for second on lap 158. Then it happened, late in the race Provenzano was into the backstretch wall allowing Roderick to assume the point. Roderick would go on to win the race, with his closest call coming on the last lap when he had to swerve to miss two cars that crashed on the back stretch. For the late driver it would be his biggest win.


In 1995, the race was shortened to 100 laps but it didn’t make much difference as the driver who had been as strong as anybody in the race, “Little John” Provenzano picked up his fifth NCTC crown. Sadly, it would be the last NCTC to be run at .


In January 1996 the famous “Dear Driver” letters were mailed out to competitors by the management of Santa Fe saying racing had been suspended for the 1996 season. In March 1999 the famous facility would fall to the wreck ball to make way for an upscale housing development.


Santa Fe Speedway and the National Clay Track Championships are now just a fading memory. But to those many die-hard dirt track racing fans there will always be a very special place in their heart for both.


A special thanks goes to two racing historians for their contribution to this story. Stan Kalwasinski and Bob Markos. Without their input this story would not have been possible.