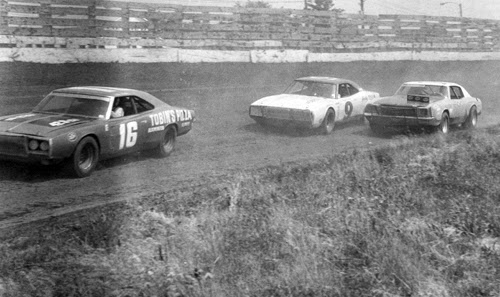 
There first visit on June 7, 1969 was definitely impacted by damp, chilly and what would end up being rainy conditions. A crowd of 5,362 braved the chilly weather conditions and turned out for the inaugural visit of the USAC Stock Cars.


Nineteen cars took time trials with then three-time Indy 500 winner A. J. Foyt setting fast time at 24.91 seconds. Threatening weather conditions then caused officials to change the order of events and run the feature first. At the drop of the green outside front row starter Paul Bauer took the lead for 5 circuits before Butch Hartman came charging through the inverted field to take the lead.


Meanwhile 18th starting Foyt was on the move and inherited the lead on lap 35 after leader Hartman retired with axle problems. On lap 45 Foyt caught the wall and this allowed Don White to take the lead. Foyt then pitted on lap 51 because of a mud splattered windshield and his 19 second pit stop put the Texan a lap down. 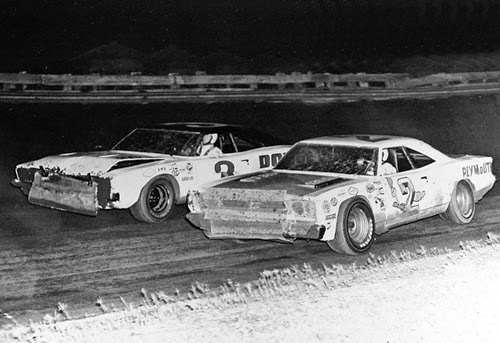 Roger McCluskey (2) and  Don White (3) battle early on during the USAC stock car feature at Knoxville on June 7, 1969. White would go on to win the controversial race while McKluskey would take fourth. Photo courtesy of Vince Pepple

Don White, one of many talented stock car drivers from Keokuk, Iowa, would be awarded the win aboard his ‘69 Dodge Charger, Foyt was second in his Ford Torino, Verlin Eaker was third in a ‘68 Dodge, Roger McCluskey fourth in a ‘69 Plymouth and Paul Feldner fifth in a ‘67 Ford. After the feature, Foyt beat Eaker in the trophy dash and as they were lining the cars up for the first heat the rains came and the balance of the program was called. One interesting comment was made by Roger McCluskey that day that modern fans might find amusing. “I never saw so many people at a rodeo grounds before.”


USAC’s second trip to on June 6, 1970 can be summed up in one word. Keokuk. That’s because the first three drivers across the finish line were all products of . Only 16 cars made the call and when time trials were over Roger McCluskey had set fast time of 24.01 seconds. Heat races went to Ramo Stott and Lem Blankenship.


Billy Reis jumped to the lead of the feature in his ‘69 Camaro and would pace the field for six laps before being passed by Ramo Stott who would lead the race for just four laps before Don White took command of the race in his ‘69 Dodge and led until lap 62 when local driver Earl Wagner took command. White would regain the lead on lap 62 and stay in front for the rest of the way picking up his second straight USAC win at .


Another Keokuk driver Lem Blankenship would come home second in his 69’ Plymouth with a third Keokuk chauffeur Ramo Stott bringing home his ‘70 Plymouth in third, giving MOPAR and Keokuk the week. Wagner would hold on fourth in a and Jack Bowsher would finish fifth in his Ford.


For the first time during the 1970 season defending series champion and point leader Roger McCluskey would fail to finish in the top three, coming home 11th in his ailing Plymouth. 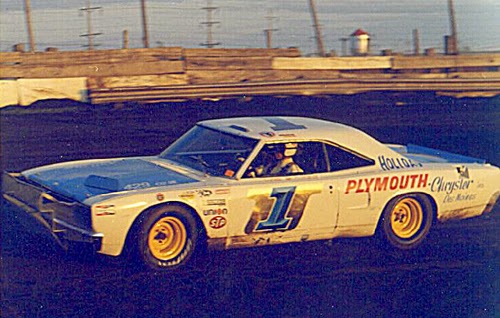 Roger McKluskey races around the historic half-mile during the 1971 contest.


It was another damp, muddy and heavy track that greeted the USAC drivers when they returned for their annual battle on the half mile on May 1, 1971. Those conditions caused problems all day for the competitors especially with radiators and windshields. Two-time defending race winner Don White grabbed the pole with a lap of 24.8 seconds.


At the drop of the green Wally Christensen took the lead in his Ford, he led until surrendering the lead to Dave Wall of Kansas City, Wall was passed by 1969 series rookie of the year Verlin Eaker, Eaker stayed out front until lap 67 when Butch Hartman put his Hartman’s White and Auto Care Charger out front and stayed there for the remainder of the race. It would be the ’s fourth win in his six year career and it certainly would not be his last.


There was controversy once again at the facility. First, some USAC driver objected to Ernie Derr and other non-USAC regulars competing. Promoter Marion Robinson made things easy for them to accept when he added $600 to the $7,500 purse allowing six more drivers to compete as a field of 26 cars started the event. Secondly, mud and dirty windshields would once again have a hand in the outcome as defending series champion Roger McCluskey was forced to pit twice because his windshield wipers did not work.


The race was heralded as a McCluskey-White-Derr shootout but that did not materialize. White the fast qualifier started 19th in the mostly inverted field and retired on lap 19 with clutch problems. McCluskey had his windshield problems and Derr despite finishing second was a lap down to Hartman. Paul Feldner, John Reimer and Terry Ryan rounded out the top 5 in a 100-lap feature completed in 50 minutes 4.06 seconds. Hartman pocketed $1,075 for his efforts witness by a crowd of 6,000. 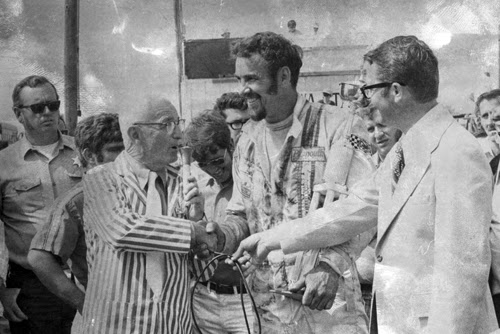 
A standing room crowd of 11,500 fans greeted the series when it returned to for the fourth time on June 11, 1972 and the winner of the race was not one of the favorites. Chuck McWilliams of Union, Kentucky, in his first season with USAC, took the lead when Ramo Stott dropped from the race on the 75th lap with oil pressure problems in his 71’ Dodge. McWilliams, a graduate of the independent dirt tracks in the Ohio and Kentucky area, kept his ‘72 Plymouth out front the rest of the way to take home the win in 45 minutes and 42.03 seconds.


Fast qualifier Verlin Eaker, piloting a ‘70 Dodge, with a lap of 24.6 seconds grabbed the lead from his pole position and led the affair for nine laps before being passed by Lem Blankenship in his ‘72 Dodge. On lap 21 Eaker regained the lead and then on lap 33 Eaker collided with Paul Sizemore. Eaker kept on going but Don White and Paul Feldner plowed into Sizemore’s wrecked car bringing out the caution. Eaker led for two more laps before going pit side to have a fender pulled out and Blankenship inherited the lead.


On lap 46 Bay Darnell would take command of the race and lead until lap 72 when Stott when to the front for his three laps before retiring. Following McWilliams were Blankenship, Ray Bohlander, Ken Reiter and Butch Hartman.


The April 28, 1973 race would once again be a Keokuk affair. Don White would set fast time and lead for eight laps before surrendering the lead to second starting Ernie Derr, but Ramo Stott took over from that point and led the remaining 90 laps. Stott turned the 100 laps in 43 minutes and 56 seconds in his . Jack Bowsher, Derr, Butch Hartman and Bay Darnell rounded out the top five. 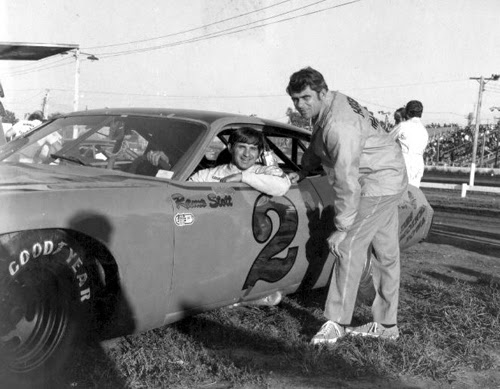 Ramo Stott of Keokuk Iowa, is joined by car owner Jack Housby of Des Moines after Stott won the USAC trophy dash on May 24, 1974.

May 24, 1974 would be the final appearance at for the USAC stock cars and this time Butch Hartman would ruin the Keokuk party. Hartman started on the point and while he only led 23 laps he was out front at the end in a race that saw but a single caution.


The other race leaders were the three Keokuk drivers of runner-up Ernie Derr who lead for 16 laps, second starting Don White, led for 23 laps and third starting Ramo Stott led for 38 laps. Stott would drop from the race after 61 circuits with suspension problems and White would hang on for fifth.


At the checkers for the final time for the USAC Stock Cars at it was Hartman, Derr, Irv Janey, Larry Phillips and White. After racing for six straight years at what Roger McCluskey called “the rodeo grounds” the USAC stock cars would never return.


As for the Knoxville Raceway at the Marion County Fairgrounds it has since become the Mecca of sprint car racing around the world.