The IMCA Sprint Cars at the Knox County Fair 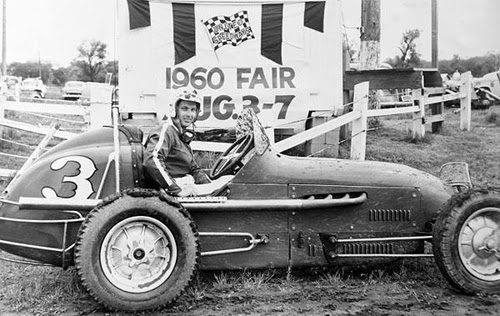 Jerry Blundy in victory lane at the Knox County Fair. Blundy would score wins at the historic half-mile in the 1950's, 60's and 70's.

By Kyle Ealy
– Right off of Interstate 74 on exit 51 in , Ill., is the Knox County Fairgrounds; an historic half-mile that lies dormant except for maybe once a year when the fair is in town. It’s just one of those tracks that fell on hard times and now is nothing more than a memory.


While I’ve never attended a race there personally, I’ve heard plenty of stories about some of the great stars who have competed there and fantastic races that have taken place over the years and of course, my historical-hungry brain took over and I decided to do a little investigating on whom, what and when.


As it turns out, the International Motor Contest Association (IMCA) played a big part in shaping the history of the track. Starting in 1957, IMCA big cars (sprints) became part of IMCA’s regular fair circuit and when the Knox County Fair came around every August, so did the big cars.


On , a driver quite familiar in that area grabbed top honors in the 15-lap feature. Jerry Blundy of nearby , fought off a determined Duke Hindahl in what would turn out to be his only big car victory of the year on the IMCA circuit. The 15 circuits were completed in 6 minutes and 5 seconds before a standing room only crowd.


In 1959, the IMCA returned to town on August 6. Pete Folse of , driving Hector Honore’s legendary “Black Deuce” took the 20-lap headliner as he dueled Blundy for much of the race.


Big car races were quickly proving to be so popular attraction there, so Al Sweeney, promoter of National Speedways, Inc. and organizer of the event, decided to make it a two day show starting in 1960. On August 5, Pete Folse and Harold Leep of Wichita, Kan., got in a side-by-side battle with Folse gaining the upper hand to take the win. The next night, August 6, Folse took the 20-lap feature with that local guy Blundy right on his bumper again.


The 1961 Knox County Fair sprint car races saw two new faces in the winner’s circle. Harold Leep, after coming so close the year before, outran Emmett “Buzz” Barton of Tampa, Fla., on August 4 for his first win of the season but Barton came back on August 5 to claim the 20-lap main over Leep and a young man by the name of Jay Woodside. 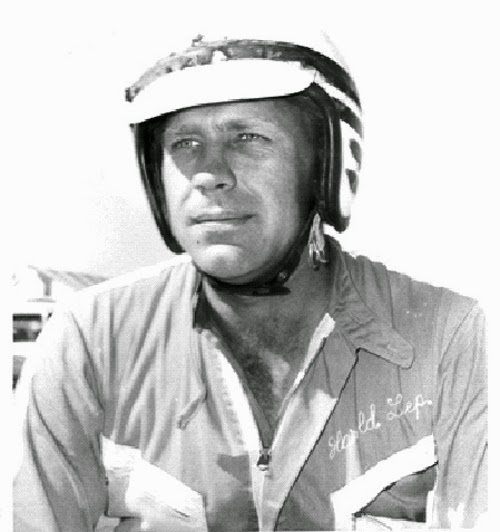 
With scheduling issues, the race was cut back down to one day in 1962 but that didn’t drive the crowds away. On August 3, over 3,000 race fans saw Harold Leep, piloting the Red Lempelius Offy; win the 20-lap feature event. Leep and Jerry Blundy put on quite the show for the fans before Leep prevailed again, earning himself $215 in first place money.


Spin-outs and multi-car pile-ups highlighted the action on , as Leep would win his third Knox County Fair race in a row. Driving the No. 25 Chevrolet, Leep took an early lead in the main event and stayed on top the rest of the way. Jerry Blundy stayed in close pursuit but settled for the bridesmaid role once again.


That same program also saw one driver being suspended for the rest of the season after two days of what National Speedway, Inc officials termed “rough driving”. Bob Coulter of , who was involved in four accidents during the two-night race program, hit Jerry Blundy from the rear to cause the driver to start a spinout. Blundy was leading the field at the time.


Al Sweeney, president of National Speedways, Inc., and starter of the two races, recommended a suspension of not less than 30 days. However, on the basis of Sweeney’s testimony and that of several other track officials and drivers, the IMCA ruled to keep Coulter off IMCA tracks for the rest of the year.


Jerry “Scratch” Daniels of St. Paul, Minn., would capture the 25-lapper on 64 and on the very next night, August 8, the defending national champion, Gordon Woolley of Waco, Tex., would claim the 30-lap finale.


On , Jim Moughan of , took the win over Tom Bigelow of , Don Brown of , Jerry Blundy and Gordon Woolley.


Jerry Richert of , would earn a hard-fought 30-lap feature victory over Moughan, Bill Puterbaugh, Dean Elliott and Gordon Woolley on .


As the 60’s started to come to an end, hometown favorite Jerry Blundy finally started winning the Knox County Fair sprint car races. He also became a top contender for the national title as well.


On Thursday evening, , Blundy edged Tom Corbin of , to take the 20-lap feature and then followed that win with another trip to victory lane the very next night, again beating Corbin and Chuck Lynch of Springfield, Ill., to the stripe. At the end of the season, he would finish third in nationals points. 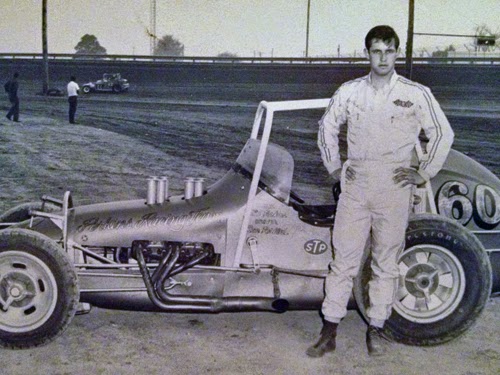 
On , Ron Perkins of , grabbed Thursday night honors, winning the 25-lap main over Jerry Daniels. However, the following night, Blundy roared back in the 30-lap big money main event and took home the top prize over Lee Kunzman of and Perkins. Once again, Blundy would tally enough points at season’s end to take third in the national standings.


saw Ron Perkins back in the winner’s circle again, winning the 25 lapper over Blundy and Darl Harrison of . Harrison would come back the next night, August 2, and take home the bacon with stellar drivers such as Benny Rapp of Toledo, Ohio, Blundy, Jay Woodside and Buzz Rose of Cedar Rapids, Iowa trailing behind. would go on and win the IMCA national championship that same season.


The Knox County Fair would only see one race in 1970 but it was a meaningful one. Jerry Blundy, driving the L & M Motors Chevrolet, would grab the lions share of the $1,260 purse that day, beating another star-studded line up of Benny Rapp, Dick Sutcliffe of Kansas City, Jim Moughan and Jay Woodside.


After sliding down to ninth in IMCA sprint car points in 1969, this was the year Jerry Blundy put it all together and won his first IMCA national championship. His seven victories were tops on the circuit for the year and he beat out four-time and defending champion Jerry Richert in the process.


The two-day show returned on with Blundy once again in victory lane. He grabbed the 25-lap feature win over Dick Sutcliffe with Ron Larson of in third. The next night, August 7, Sutcliffe turned the tables and scored the win in the 30-lap finale with Chuck Amati of , taking runner-up honors and Ron Larson again taking third. Blundy would go on to claim his second straight national championship at the end of the season.


A month before the 1972 Knox County Fair sprint car races were to take place, Jerry Blundy was involved in an accident in Webster City, Iowa. It not only ended any chances of winning at his hometown track but also wiped out the chance to win three consecutive IMCA national championships. 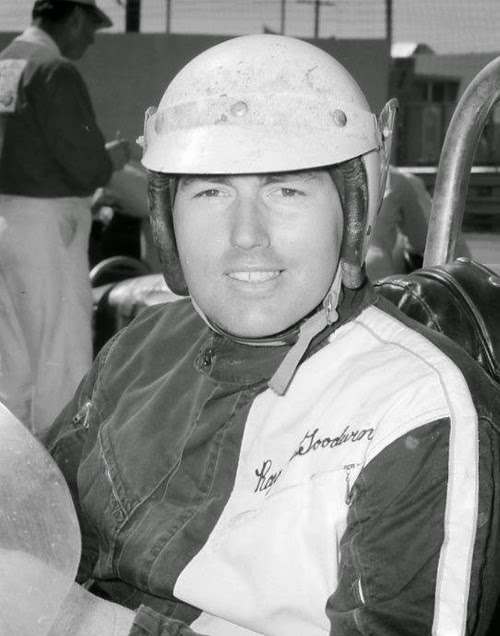 
Ray Lee Goodwin of , was trailing Blundy by only 10 points in the national standings when he pulled into the Knox County Fairgrounds on . When he headed out of town later that evening, Goodwin was the new point’s leader.


Weaving his way through the middle of the field, Goodwin scored a come-from-behind victory in the 25-lap feature event. The hard-charging Goodwin throttled his Chevy-powered sprinter into the lead with four laps to go and coasted to victory behind the wild cheers of area race fans. Goodwin would take his point’s lead and never look back, winning the IMCA national championship.


1973 would see a new winner to . Ralph Blackett of led from start to finish in winning the 25-lap feature on August 3. More than 2,500 area race fans turned out to see the hard-charging Blackett survive three yellow flags and a late come-from-behind effort by Bill Utz of , Mo. Thirty-five drivers from 12 states took part in time trials with Buzz Rose of Mt. Vernon, Iowa, had the quick time of the evening with a half-mile clocking of 26.66.


It was “ night” on as two talented drivers from the “Show Me” state showed the field and the crowd some quick and steady driving in the 17th annual and final running of the IMCA sprint cars at the Knox County Fairgrounds.


Bill Utz of , runner-up in last year's sprints at the half-mile, grabbed the lead from Sonny Smyser on the eighth lap of the feature and was never headed.


Another Missourian, Gene Gennetten, could possibly have won the feature had it gone a few laps longer. Starting in the 10th position because he did not finish his heat race, Gennetten steadily moved through the pack, passing Larry Kirkpatrick of Bushnell, Ill., for second place on lap 16 and pressing Utz hard when the final checkered flag dropped.


The IMCA sprint car circuit would press on for two more years, but with other sprint car organizations sprouting up, the days of the fair circuit were pretty much dried up and so were the annual IMCA sprint cars programs during the Knox County Fair.


Several other sanctions made appearances over the years including the now-defunct National Speedway Contest Association and most recently, the Sprint Invaders but nothing packed them in from near and far like the IMCA sprint cars.