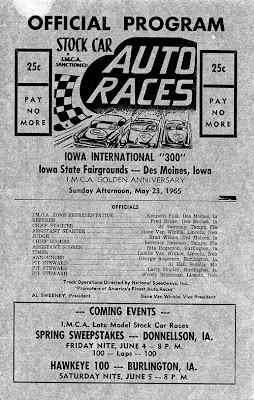 Omaha, Neb. - In modern dirt late model racing, 100 laps are about as long a feature race as you will find. These features usually ran as the conclusion to a two- or three-day event. Back when the International Motor Contest Association was in its prime, 200-lap feature events were very common and sometimes races were even longer.
One of the most famous of these races was the Iowa 300 held at the Iowa State Fairgrounds in Des Moines, usually around the Fourth of July. IMCA first sanctioned a 4th of July race at the Iowa State Fairgrounds in 1950, a 200-lap event won by Don White. From 1951 until 1956 the distance was increased to 250 laps with two wins by Ernie Derr and Jimmy Ward and the other two going to Shreveport’s Herschel Buchanan and Harlan, Iowa’s Johnny Beauchamp.
Beauchamp who totally dominated IMCA in 1956 and 1957 won the 1956 Iowa 250 before 23,000 fans. In fact, the crowd was so large that National Speedway Promoter Al Sweeney ran out of tickets. After some anxious moments, he was saved by the promoter of a thrill show who happened to be in the infield and had a supply of tickets.


In 1957 the race was increased to 300 laps and was often called the Iowa International 300 as sports cars were allowed to compete against the stock cars. The three things I find fascinating about this race was the distance, the inclusion of sports cars, and the size of the crowds. This story will concentrate on the years from 1957 thru 1973 when the race was 300 laps in distance. One thing that is interesting to note about the Iowa 300 is that while he won the race twice at a shorter distance, Ernie Derr, the dominate force in IMCA stock car racing did not win the 300 in the first nine years of its running, however, when he finally won in 1966, he won it six years in a row. Some of the more exciting 300’s is recalled below:


On July 14, 1957, the first 300-lap Iowa International was ran at the Iowa State Fairgrounds before a crowd of 10,000 fans. Bill Chennault driving a Chevy set a new track record in qualifying at 29 seconds flat. Forty-one cars turned out for qualifying with the fastest 33 making the race. Four sports cars entered the International with only 2 making the race and neither of those would be a factor. , ’s Bob Burdick driving his dad’s Ford won the first 300 holding off two-time defending IMCA champion Johnny Beauchamp and former IMCA champion Don White. Burdick pocketed a huge amount for those days, taking home $1,000 in winnings.


1958 saw a first, as Loyal Katskee of Omaha, Nebraska drove his Ferrari to fast time of 28.86 seconds and went on to finish fourth in the race. Katskee would later become the only sports car driver in IMCA stock car history to win a series race when he drove his Ferrari to the win on the mile at the Missouri State Fair in in August 1958. As for the race itself, it turned into an accident filled event with only 15 of the original 33 starters finishing the race. The race was filled with spectacular spinouts, broken axles and spindles, blown tires but fortunately no serious injuries. The two most serious being Bud Burdick with a badly sprained ankle as a result of his car hitting the first turn after a blown tire, and Bob Potter being forced to the pits with heat exhaustion. Frank Richards, forced out earlier in the race, drove relief for Potter in his 57’ Chevy Convertible and came home in fifth position.


The most spectacular event of the afternoon happened on lap 154, when second place runner and former IMCA champion Johnny Beauchamp’s Chevy caught on fire after being hit by a piece of metal from the track, which severed the gas line and caused flames to shoot up all over. Beauchamp showed tremendous courage in bringing the car to pit lane and avoiding an incident on the track. At the end of 300 laps and after 14 yellow flags, it was Don White driving his Ford into victory lane. The combination of White’s driving skills and Paul Newkirk’s mechanical genius made the pair unbeatable. Defending race champion Bob Burdick was second a lap down followed by Frank Lies of Wichita, Kansas.


In 1959, Darrell Dake put an end to his long string of bad luck by driving his convertible to a win before 13,500 fans. Dake gradually worked his way through traffic from his eighth starting position and took the lead on lap 154 from Lenny Funk who had battled Bob Kosiski for the first fifty laps for the lead before Kosiski’s Thunderbird retired with overheating problems. Funk held on for second and future NASCAR star Dick Hutcherson was third. Perennial IMCA champion Ernie Derr qualified poorly and then retired on lap 124 with a punctured oil pan. 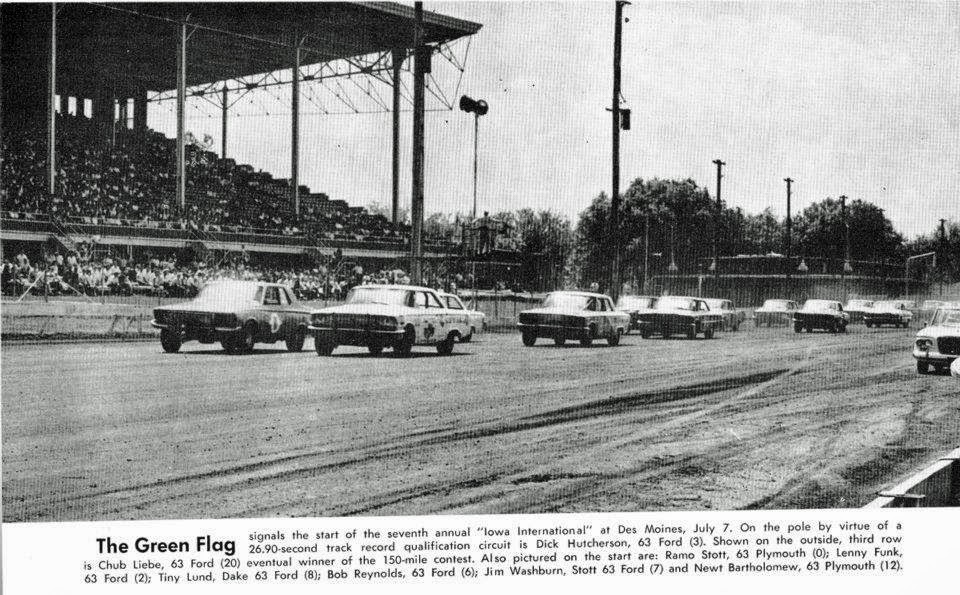 The 1963 edition of the race proved plenty of excitement for the more than 14,000 fans in attendance. First of all, there was the much-anticipated return to Iowa of Daytona 500 winner Tiny Lund. The brand new Zecol 63' Ford brought in for , however failed to qualify and drove Darrell Dake’s car for the first part of the race challenging leader Ramo Stott throughout the first 116 laps for the race lead before relinquishing the ride back to Dake on a pit stop. Stott seemed in control until he lost a wheel 32 laps later and retired. Pole sitter Dick Hutcherson, like Stott, a member of the Keokuk Connection, set quick time but blew an engine on lap three, and Ernie Derr the other member of the Keokuk Connection missed the race after totaling his car at Topeka a couple days before. This gave the lead and the race to IMCA regular Chub Liebe of Oelwein, as he picked up the biggest win of his career.


For reasons unknown to the author, the 1965 300 was an exception to the rule, in that it was held on May 23, instead of the traditional July date. Future ARCA champion and Daytona 500 pole sitter Ramo Stott picked up $1,100 in winning the 2 hour and 35-minute affair over (who else) rival Ernie Derr. 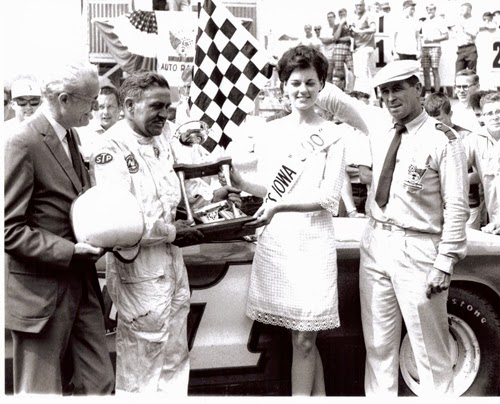 The 1969 version of the race is most noted for the sweltering heat, as 10,500 fans sweated their way through a nearly 2.5-hour event. Tiny had returned again from NASCAR and was aboard Dick Johnson’s 67' Ford and after starting toward the back of the 30-car field made it to fourth before hitting the wall and retiring from the event. IMCA veteran Ole Brua, along with Ron Hutcherson and Fred Horn pushed Ernie Derr all the way to the finish, but in the end, the cagey veteran Derr prevailed with Horn second and Brua finishing third. 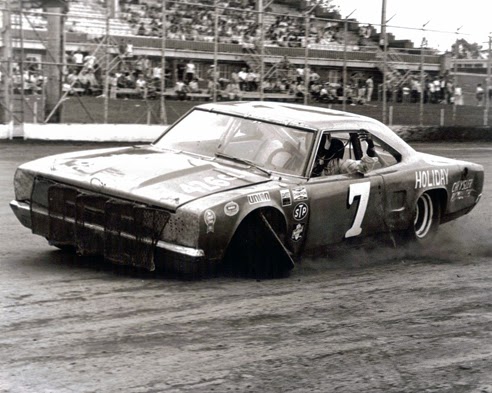 On July 11, 1971, more than 11,000 fans were treated to a classic battle between two old rivals and members of the Keokuk Connection. After Governor Robert Ray waved the green flag as the honorary starter, Ernie Derr and Ramo Stott put on one of their many classic battles. For 250 laps the two rivals ran wheel to wheel until Derr hit the wall between turns 3 and 4 and was forced to pit to change a tire. Stott built up a four-lap lead and had the race in hand until lap 295 when he broke the whole left front wheel assembly and was sidelined with only four laps remaining. Ernie Derr would come back and win his sixth straight 300. Derr and Stott were so far ahead of the competition that Stott still managed to finish second in the 35-car field. Michael Petrucci of rounded out the top three.


On July 9, 1972, IMCA sanctioned its last 300 at and it was a day Gerry Harrison of would just a soon forget. Harrison blew a tire on lap 288 while leading the event and handed the win to Fred Horn of . was not the only victim that day as Irv Janey (who would win the 1972 IMCA championship) also had trouble while leading. Janey was leading the race on lap 129 when his transmission gave out. Earlier he had set fast time. was able to recover for second and Gordon Blankenship, another Keokuk driver (who would be the 1973 IMCA champion) ran third in the final edition of this classic race.


Like the IMCA season point battles, the 300 was dominated by driver from Keokuk. Ernie Derr who finally won the 300 in 1966, then won it six straight times before retiring. His chief rival in IMCA for many years, Ramo Stott was a three-time winner of the event and Don White (Ernie Derr’s brother-in-law) and Dick Hutcherson, also won the event giving the Eastern Iowa river town, 11 wins in 17 Iowa 300’s.


So, the next time you go to a 100-lap Dirt Late Model feature and think it’s a long race, just remember the days of the 300.