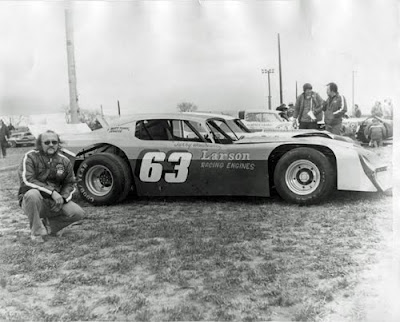 By Lee Ackerman
Omaha, Neb. - 1977 was the 21st season of racing at Omaha’s Sunset Speedway and in the late model division it would be a year to spread the wealth around as in the first 12 feature events of the year, 12 different drivers went to victory lane.

The season would start with the annual Spring Invitational on April 23, 1977...

A new format was put in place for the ‘77 Spring Invitational. In an attempt to increase spectator interest, the 100-lap feature was changed to twin 50-lap features. Estherville, Iowa’s Bob Shyrock took the lead midway the first feature when race leader Jack McDonald of North Dakota broke an axle. Shyrock would go on to win the event with Bill Rice of Des Moines second and Bob Kosiski third. In the second feature, Joe Kosiski, in just his second year of racing a late model, took the win ahead of Kent Tucker of Aurora and Joe’s dad, Bob Kosiski.

The 1977 season opener came on May 15 and it was business as usual as multi-time track champion Bob Kosiski won the feature event over Kent Tucker. On May 22 Jerry Wancewicz duplicated his win in the second race of the season in 1976 as he lead all 25 laps to take the win over Joe Kosiski, Bob Kosiski, Dave Chase and Bill Wrich.

The May 29 Memorial Day Weekend race saw 10 laps added to the feature and for Don Styskal of David City it was a good thing. Styskal took the lead from Jack Golder on lap 26 and went on to win the 35-lap event over Dave Chase. “We needed this weekend badly,” said Styskal. “Before this, we blew a head gasket in the Spring Invitational. Last week we twisted the oil pump shaft and in tonight’s heat we were running on seven cylinders when a spark plug wire came off.”

On June 5 it was Blair’s Randy Sterner leading the entire 25-lap feature to bring home the win in his “Morganized car.” “I morganized my car and it returned the favor,” said Sterner. Referring to the new coat of Cadillac Blue paint he had painter Bob Morgan put on his car. “It worked; we won at Harlan on Friday night and here tonight in a car with a five year old engine and a new paint job.” Finishing behind Sterner were Kent Tucker, Bill Kirk, Joe Kosiski and Keith Leithoff.

On June 19, Al Druesdow would make it seven different winners in seven weeks as he won the make-up feature from June 12. Bill Martin would add his name to first time winners in 1977 by taking the regular June 19 event. Martin used a lower horse power motor to navigate the dry slick conditions and win the final event of the night by staying out front of Dave Chase, Bob Kosiski and Kent Tucker.

On June 26, Kent Tucker of Aurora made it nine different winners. The feature would see four restarts before action got underway with Bob Kosiski going to the front on lap five and Tucker glued to his rear bumper. On lap 18, Tucker made his move coming out of turn two and held on for the win with Kosiski second, Jerry Cunningham third, Joe Kosiski fourth and Glenn Robey fifth. “Bob’s (Kosiski) weakest spot on the track – was in turn two,” said Tucker after the race. I went up high and shot down low to get by. I knew I couldn’t get around him if I stayed in his groove.” 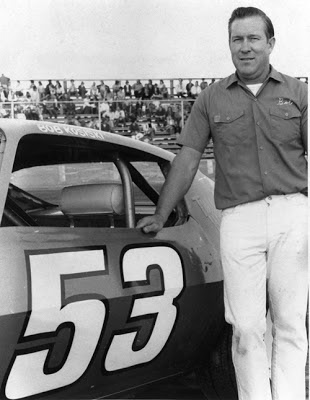 The following week, Dave Chase in his first season competing at Sunset regularly would charge from his 10th starting position to become the 10th different winner of the season at Sunset. Chase cruised to the win over Bob Kosiski, Jerry Wancewicz and Keith Leithoff. Ron Tilley would take the feature the next week winning over Don Styskal on July 10. After two weeks of rain outs, action continued on July 31 with Sunset veteran Keith Leithoff driving his three year old Chevy to the win over Dave Chase and became the 12th different winner in 12 weeks.

On August 14, the streak finally came to an end when Ron Tilley of Council Bluffs became the first repeat winner in 1977 at Sunset and it almost didn’t happen. Tilley, who broke his thumb in the feature the week before, was going to take a couple of weeks off, but when car owner Dick Bradley couldn’t find a replacement driver, Tilley jumped back in the car and went out and snapped the string. Tilley grabbed the lead on lap nine and steadily increased his margin until the caution waved with three to go. On the restart he was able to hold on for the win with Bob Kosiski, Bill Martin, Joe Kosiski and Kent Tucker following. “It was so close to not happening.” Tilley commented because of his broken thumb.

Randy Sterner gave himself a big birthday present when he became the second two-time winner at Sunset on August 14 and to get the job done he had to defeat the other two-time winner Ron Tilley. Sterner also a winner at Playland Park (in Council Bluffs) on the asphalt the night before started in sixth position and got by Tilley on lap 14 and held off Tilley by a couple of car lengths to pick up the win.

Following his win on the asphalt at Playland, Sterner didn’t have time to change the car alignment and fought those issues throughout the night at Sunset. “The alignment specs are wrong, the steering isn’t right.” He said after the race. “I haven’t had time to change it, only the oil and tires.” Jerry Wancewicz started in the rear and finished third with Bob Kosiski fourth and Keith Leithoff fifth.

Ron Tilley would accomplish what no other driver did at Sunset in 1977 when he won the final points race of the reason becoming the tracks only three-time winner of the season. Tilley beat Bob Kosiski by only a couple of car lengths to pick up the win. Kosiski, however could not have been to upset as he won his tenth track championship, his seventh in a row. Jerry Wancewicz drove Joe Kosiski’s #53 to third as Joe Kosiski was out of action with a broken hand.


Two special events would close out the 1977 Sunset racing season. First on September 17, the wily old fox Bill Wrich of Kennard would win the late model portion of the Triple Crown race with Kent Tucker and Jerry Wancewicz rounding out the top three. 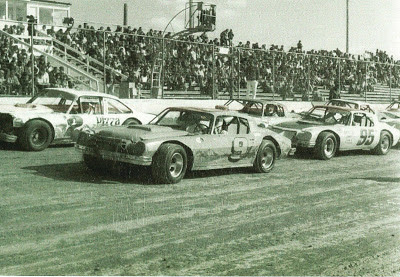 Curt Hansen (9) and Don Hoffman (2) lead the field to green in the 1977 Cornhusker-Hawkeye Challenge. Ed Sanger (95) is positioned right behind Hansen.

Then came the finale of the season, the sixth annual Cornhusker-Hawkeye Challenge and what a way to bring the season to a close. Preliminary events were held on Friday night with the feature events scheduled for Saturday night being rained out. That meant a dusty Sunday afternoon race but despite the dust it turned out to be a whale of a battle for the win.

Two-time and defending race winner Curt Hansen of Dike, Iowa started on the pole and led until lap 78 when veteran Ed Sanger of Waterloo, Iowa took the lead. From there on Hansen tried to retake the lead several times pulling even with Sanger, but never making the pass. Finally coming off turn four to take the checkers Hansen edged by Sanger to win by a bumper claiming his third straight Cornhusker-Hawkeye Challenge as Iowa drivers continued to dominate the event.

It was a fitting end to a very competitive season of racing at Sunset Speedway.