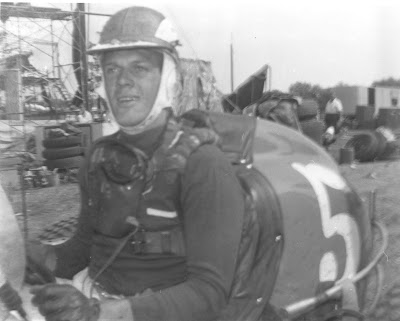 
Omaha, Neb. - Back in the glory days of midget auto racing one of the most competitive midget organizations in the Midwest was the Kansas City Midget Auto Racing Association (KCMARA). The organization was founded in 1935 and ran through 1963. It base of operations was the legendary Olympic Stadium in Kansas City, Missouri. Olympic Stadium also started operation in 1935 and was a 1/5-mile bullring until expanded to a 1/4-mile in 1952. It ceased operations in 1974.

Carl Badami won four of the first five KCMARA championships giving way to only Vito Calia in 1938. Calia would win the championship five times. By the 1957 season other drivers had set atop the association point standings including; George Binnie, Ben Harleman, Guy McHenry, Bob Slater and Jud Larson. Bill Chennault won the championship in 1953 then added 1956 and 1957 championships.

The 1957 season was an active season for the association. They shared the stage at Olympic Stadium six times with the stock cars. Many of the Associations drivers also competed in two United States Auto Club (USAC) shows at Olympic on May 12th and again on June 16th. Both USAC shows were capped by 100-lap main events.

In the May 12th show, KCMARA drivers performed well in the preliminary events and Carl Williams finished 4th, Will Hunziker 7th and Eddie McVay 8th in the feature. The winner of the feature was a young midget driver from Houston, Texas who scored his first ever USAC win that night by the name of A. J. Foyt. In the June 16th show Bill Chennault put on a clinic against the USAC regulars setting a new track record in qualifying at 12.89 seconds and then setting a new 100-lap mark in winning the feature in 23 minutes 00.34 seconds.

Starting in June their activities were centered on two new tracks within a 70 mile radius of Kansas City, those being the Shawnee County Speedway in Topeka, Kansas on Friday nights and the new 1/4-mile facility in Savannah, Missouri on Saturday nights. They would also sanction events at Neligh, Lincoln and Omaha, Nebraska and compete with the St. Louis Auto Racing Association at Mexico, Missouri. Below are highlights of the 1957 KCMARA season.

Bill Chennault won a number of features and would win his fourth association championship. A former stock car driver named Joe Walter would be named Rookie of the Year. Walter started the season in slower cars moved to the Fords and ended the season in an Offenhauser. Carl Williams (who would later drive Indy cars) won a number of races but was also involved in several accidents, the last be a bad one that sent him to the hospital and out for the rest of the season. 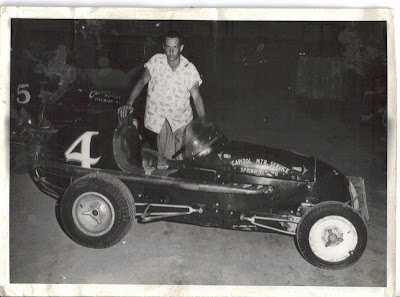 On June 19th Bobby Parker of Omaha, Nebraska wheeled the No. 4 Thomas Offy to a heat win and then a decisive victory at the Shawnee County Speedway. Howard House in his own No. 12 Ford set fast time at 17.5 seconds, but was sidelined for the evening after being involved in an accident in which Carl Williams went over the wheel of Bill Chennault and overturned.

On June 28 at Savannah, Bill Chennault jumped in the No. 98 Lane Offy after his regular mount the Calia Offy developed mechanical problems and went on to win a hard fought feature over fast qualifier Ed McVay. McVay who had set fast time at 15.2 seconds, battled tooth and nail with Chennault over the 12-lap distance before falling short by less than a car length.

Willy Hunziker dominated the July 5 show at Topeka winning his heat, then the winner’s heat and then the 25-lap feature over Bobby Parker. Chet Hamby had fast time of 18.05 seconds. Howard House won the Bob Mark Memorial Race. The event was held annually in honor of the driver who was fatally injured in 1955 at Lakeside Speedway in Kansas City, Kansas. The next week at Topeka, Ed McVay won the feature which was halted twice for accidents, the last one taking out Bobby Parker who was striving for a sweep.

On the 18th at Topeka Roger Lane was the star of the evening wheeling his No. 98 Lane Offy to three wins, the fast car heat, the semi and then finishing it off with a win in the feature. The next night at Savannah, Bobby Parker made up for his bad luck the week before at Topeka by taking the feature.

Carl Williams captured the July 30 feature at Savannah after waging a fierce duel with Bill Chennault. Chennault won the fast car heat with Williams second. On August 9 at Sunset Speedway in Omaha, Bill Chennault set fast time of 15.7 seconds then came back to best Willy Hunziker in the 25-lap feature. Local star Bobby Parker was knocked out of the feature when he tangled with another car.

The midgets returned to Savannah for an exciting seven race program that saw no driver win more than one event. Ed McVay won the feature. Heats went to Jimmy Reynolds, Howard House and Will Hunziker. On August 24 the series returned to Savannah before the largest crowd of the season. Bill Lawson piloting the No. 74 Offy led the main event until the final lap when Bill Chennault passed for the win. Five cars spun in the wild feature.

Over the years the Kansas City Midget Auto Racing Association produced some of the best midget drivers in the Midwest and the little cars provided the fans with some exciting action.