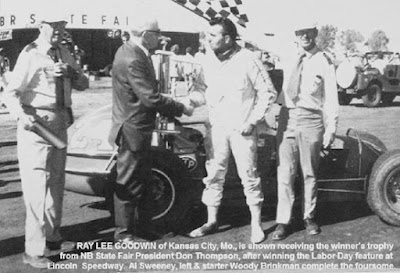 The veteran Kansas City driver, who won a rich 50-lap feature in Sedalia, Mo., last weekend, moved into the pole position when Eddie Leavitt of Kearney, Mo., who had set a one-lap record in time trials, failed to make the main event.

Had Leavitt avoided mechanical trouble and advanced to the feature, Goodwin would have started the race on the fourth row, inside position based on his seventh fastest qualifying time.

But since the top six cars in qualifying start the feature in inverted order, Goodwin inherited the pole where he only momentarily lost the lead to Wib Spaulding of Granite City, Ill., before a crowd of 5,800 fans.

“It looked like Wib’s engine quit or something for a bit, and that’s when I got back around him,” said Goodwin, who lost his lead on the first lap but regained it 10 laps later.

“I think the car had more straightaway speed than anyone else’s,” Goodwin added. “It seemed like a drag race because the corners were so rough from the rain.”

“But the track was in good shape as it could have been, considering a half of inch of rain was dumped on it this morning,” he pointed out.

Thee feature was Goodwin’s 20th of the season and his first ever at the Nebraska State Fair.

Ron Perkins of Des Moines, one of two defending State Fair feature champions, did not finish among the leaders. Ralph Parkinson Jr., of Kansas City, the other defending champion, did not qualify for the feature.

Dick Sutcliffe of Greenwood, Mo., which whisked to a 5-lap record in the trophy dash, became entangled with Eddie Leavitt’s car on the first lap of the first heat.

Leavitt was forced out of the race and also failed to finish subsequent efforts in the trophy dash and consolation feature where he started on the pole and held an abbreviated lead.

Forty-seven cars participated in time trials, which was delayed a little more than an hour due to light rain.