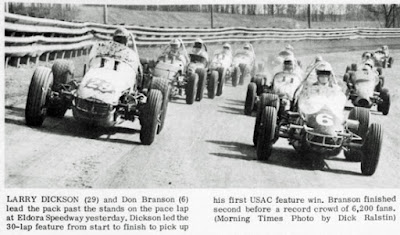 Rossburg, Ohio (April 17, 1966) – Larry Dickson traveled the rough, rocky road to success here yesterday afternoon to win his first United States Auto Club 30-lap sprint car feature.The rough and rocky part came from the high dirt banks of the Eldora Speedway which were showing the effects of the wear and tear surface from the 35 sprint cars on hand for the afternoon’s festivities.

Times were well off the records set here two weeks ago by the same cars and drivers, but if the track was slow the action was twice as fast.

USAC's racing grandfather, Don Branson, taught the youngsters how to get around the rough track by setting the fastest qualifying time of the day. But the 18.94 seconds was well off his usual performance.

Our hero of the day, the young Mr. Dickson, had a little trouble with his qualifying run and spun on his second trip around the half-mile oval. However, his first lap time of 19.19 was second fast for the day.

Greg Weld won the first 8-lap heat race of the afternoon, but again, it was Branson who was busy giving the 6,200 fans, jammed into the stands, their thrills.

With the new USAC rule of inverted starts - fastest cars to the rear in the heat races - Branson found himself sitting on the outside of the back row in the six -car event. This didn’t last long.

It wasn't too much trouble for him to get into third place, but then Branson found he was behind USAC national champion Mario Andretti who was running second - and had no idea of running third.

The pair had the crowd on their feet for five laps. Branson tried once to get by Andretti and missed. Three laps later he caught Mario coming out of No. 2 turn passing a slower car on the high slide. Branson went low and took Andretti and the slower car like Grant took Richmond.

For an instant it looked as though the second heat was going to give the fans more thrills than they had asked for, until the skilled hands of Jud Larson took control of the situation.

Larson started fourth in the second heat and moved into first place heading down the backstretch on the first lap. The only trouble was there were just too many cars that reached the third turn at the same time and "racing room" ran out.

Jud ’s sprinter was nicked in the tail by Arnie Knepper and slid high into the outer guard rail. It was a hairy place to be, but Larson was equal to the occasion.

The big Texan bounced off the steel guard rail and regained control of the bouncing sprinter - as the rest of the field drove by on the inside. His first place had suddenly turned into last, but everyone was still running.

Jud came back and made a mockery of the 10-lap consolation race to earn his starting place in the feature. Knepper proved he was sportsman by going to the public address microphone and apologizing to Jud for nudging him into the rail.

Rollie Beale captured the third eight-lapper in what was almost a photo finish with Al Miller. Al, auto racing's own Mr. Clean, charged from his fifth place starting position and came within inches of having the lead when the checkered flag fell.

The 30-lap feature belonged to Dickson from flag to flag and Branson had second place pretty well sewed up for most of the race.

Third place finisher Roger McCluskey challenged Branson in the early laps but couldn’t get past the wily Grandpa.

From there on back, things in the pack were in a state of confusion. Larson squeezed by Greg Weld to claim fourth place and Weld finished fifth, after he got by Al Miller - who had worked his way between Weld and Larson.