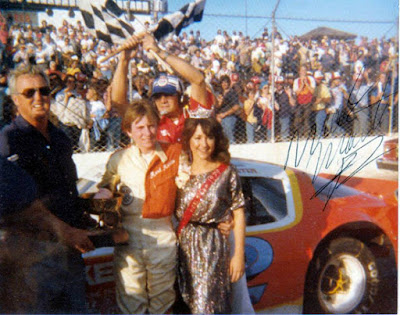 Mark Martin celebrates on the front stretch after winning the World Cup 400.
Odessa, Mo. (October 23, 1979) – Jockey-sized Mark Marin stood out larger than a grain elevator in a small Kansas town when he drove to a convincing victory Sunday afternoon in the fourth annual World Cup 400 stock car race at I-70 Speedway.

Martin, a 20-year-old who tips the scales at 120 pounds, outdrove and outlasted man-sized Bob Senneker and Mike Eddy in winning for the third time on the American Speed Association Circuit of Champions tour.

On an unseasonably hot and windy afternoon, Senneker and Eddy complained of fatigue, while Martin enjoyed the luxury of having cooling champagne poured over his head.

The race appeared to be close, with Martin and Senneker dueling almost bumper-to-bumper the final 20 laps before Martin finally earned the checkered flag by three car lengths.

It turned out, though, that Martin was on a Sunday afternoon drive because Senneker was held in the pits for one lap for passing a car the lead car (Martin) on a caution lap, and then penalized one lap for running a stop sign while leaving the pits.

Martin finished all 400 laps to 399 for Senneker and Eddy.

“The car was working, we had the speed, I felt it was working,” Martin said. “The race was fast, but I expected it to be fast.”

Martin started on the pole because he set a new I-70 record of 16.83 seconds in time trials. But, Dick Trickle of Wisconsin Rapids, Wis., the ’78 World Cup winner, shot into the lead and held it for the first 53 laps.

Joe Shear of South Beloit, Ill., then led for 46 laps before Martin surged in front for the first time.

Don Gregory of Columbus, Ohio, was in front while many drivers pitted for fuel and tires, then Shear took over again for laps 177 to 210.

Trickle, the favorite of the crowd of 5,447, got in front again, but blew a water gasket.

“It was a 5-cent water pump housing gasket,” said Trickle of the problem.

Eddy, a two-time ASA champion, was in front on lap 216 and divided first place until the 343rd lap, when Martin took it home from there.

This was the first World Cup 400 not won by a Wisconsin driver. Tom Reffner of Rudolph and Larry Detjens of Wausau won the first two.