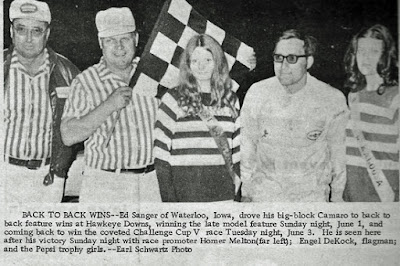 The Waterloo, Iowa, driver wheeled his 1975 Camaro to victory in the 50-lap feature, taking the lead from Verlin Eaker of Cedar Rapids, Iowa, at the midway point and never relinquishing it the rest of the way.

It was Sanger’s ninth win in his last 11 starts this season. Eaker, who was forced out of the race on lap 26 with a blown head gasket, was a three-time and defending champion of the prestigious race.

Tom Steuding of Altoona, Wis., who recorded fast time for the evening with a 25.13 second clocking on the half-mile dirt oval, started on the pole and eventually finished second to Sanger.

The card, run in memory of Bill McDonough of Cedar Rapids, who died last fall of a heart failure, attracted 70 cars and some 7,000 spectators. Only 24 cars started the feature.

As a tribute to McDonough, who won the first Iowa Challenge Cup in 1971, the parade lap of the cars was run with the pole position vacant.

Eaker, in his first start of the season, started the feature on the outside of the front row and shot his Nova past Steuding to assume the lead in the first set of turns. Eaker would lead the first 25 circuits and collect some $500 in lap money before dropping out.

Sanger, who started on the outside of the fourth row, collected $1,200 for the victory and another $500 in lap money. The total purse for the card which attracted drivers from six states, was $6,500.