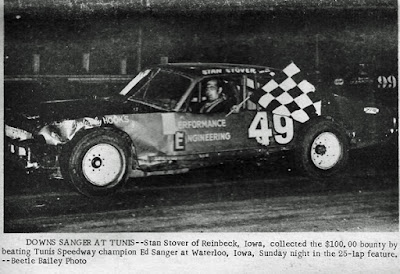 By Bob Dixon
Waterloo, Iowa (June 13, 1971) – The largest crowd of the season witnessed what had to be one of the wildest, most action-packed, and all-around confusing features at Tunis Speedway on Sunday night.

The $100 bonus to any driver topping Ed Sanger of Waterloo, Iowa, in the feature event lured 25 of the top late models, and, they were all after it, as it took six restarts throughout the 25-lap main event.

The hard-slick track presented problems, as the first red flag was displayed on the second lap, giving a preview of what was to come. Roger Kruse of Independence, Iowa, took the early lead past polesitter Ron Schaufenbeul of New Hampton, Iowa, but in no time, here came Ed Sanger breathing down their necks.

Little passing was being done, and what passing there was, resulted in a caution flag for accidents. Between restarts, Kruse continued to lead with Sanger patiently waiting his chance to strike.

The final and most controversial caution happened with three laps remaining. Kruse, still out front, hit a rut in the first turn and went sailing backwards off the track. At the same very instant, the red flag was being waved for a separate incident involving Red Dralle of Evansdale, Iowa, whose car had lost power on the backstretch.

Fortunately for Kruse, he retained his lead position on the last go-ahead green. Those three remaining laps would prove disastrous for both Kruse and Sanger, however. Stan Stover of Reinbeck, Iowa, had been steadily inching his way up through the field from his 14th starting position.

Stover, who entered the picture so suddenly, pulled up on the high side of Kruse as the green flag dropped and drew even with the race leader. Kruse and Stover raced side-by-side for the last three circuits with Stover beating Kruse to the checkers by less than a foot to take the win.

Sanger had to be content with third place while Larry Wasserfort of Waterloo, Iowa, took fourth and Glen Martin of Independence, Iowa, in fifth.

Dan Nesteby of Waterloo, Iowa and Red Dralle were heat winners while Curt Hansen of Dike, Iowa, ran away with the trophy dash.