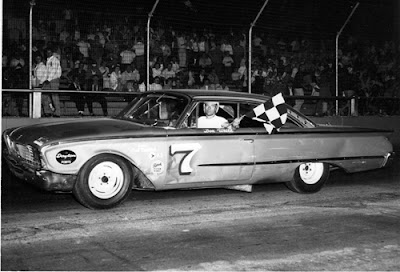 It would seem appropriate, since late model drivers Don White of Keokuk, Iowa, and Rex White of Spartanburg, S.C., hold all of the track records for the local half-mile track.

Don got into the act over the weekend when he set a new United States Auto Club qualifying record of 24.91 seconds and then won the 300-lapper on Sunday. The decision was worth $1,350.

But Rex still has the NASCAR late model marks in his grasp. The NASCAR star’s qualifying record of 24.31 seconds and his 71.002 miles per hour for a 200-lap distance are still on the books. Don’s average speed on Sunday was 68.390 miles per hour.

A crowd estimated at 7,000 saw Don lead for 296 laps of the race in his 1960 Ford Starliner, losing the pace only when he took a pit stop. But runner-up Norm Nelson of Racine, Wis., in another 1960 Ford, had to duck into the pits for fuel on the 179th lap and White jumped back out to the lead to stay. He finished well over a lap ahead of Nelson at the checkered.

It was a one-car race after Iggy Katona of Willis, Mich., blew his right rear tire on the south bank and spun out. Katona was closing on White when it happened. He hit the outside guardrail twice and was momentarily stunned, but not injured.

Nelson of Cincinnati, who won the 300-lapper here last year, dropped out early with engine woes. But Stacy relieved Jack Shanklin of Indianapolis midway through and managed to finish fourth.

It was only the second time that White has finished a full race this season and he’s won both of them. He was lavish in praise of head mechanic Paul Newkirk of Cedar Rapids, Iowa, who has handled White’s cars for the last three years.

If Fairgrounds officials sever relations with USAC, it won’t be surprising. USAC did not even have one of their drivers on hand for the event. Only through the efforts of John Marcum, ex-USAC late model chief who now runs Midwest Auto Racing Club (MARC), was a good field of cars on hand. Of the 23 starters, only 10 finished the race. A variety of engine troubles cut the field to 13 by the 80-lap mark.