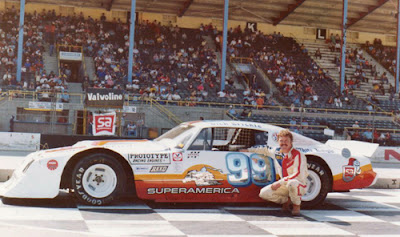 
West Allis, Wis. (May 6, 1979) - Having tried for 11 years, Dick Trickle at last won a trophy at the State Fair Park Speedway in a stock car race that boiled down to a duel between a couple of hometown chums.

“I wanted to win so badly,” Trickle confessed. “I also needed to win here. This track is the most prestigious in Wisconsin, and to a Wisconsin driver, winning here has to be the most important race he drives in this state.”

Dave Watson of Milton, who himself has tasted victory on the “Milwaukee Mile,” finished seventh in a Camaro. Watson got off on the wrong foot when pitted after running over a piece of debris early in the race. He had his tires checked over, and he had to fight his way up through the pack the rest of the day He also was later beset by a flat tire.

“Someone lost an exhaust pipe and there was no way I could miss it,” Watson said of the early incident. “I didn't know what happened. I thought maybe it punctured the radiator or cut a tire, and since we were on the yellow (flag), I brought it in.”

"We came back and started at the end of a 40-car field and spent most of the day playing catch up,” Watson added. “We didn’t have much luck at the beginning, but I felt we were lucky to get caught up We didn’t win, but I felt we did pretty well, considering where we had to start.”

Trickle averaged only 82.064 miles an hour, with 43 miles having been run under the caution flag The winner had plenty of competition as 11 cars were on the same lap as Trickle at the end of the race.

There were seven caution flags during the race, due to a combination of spinouts, blown engines and wall taggings.

Miller battled Trickle for the final 15 laps after the last of seven yellow flags had allowed the field to close up. The brakes on Miller’s car were fading, preventing him from keeping pace with Trickle or making a charge at the end.

Trickle has won nearly 700 features in his short track career nationally, but never in Milwaukee.

“I’d run here so long. I decided if I didn’t win one pretty soon, I might never win here,” he said.

Trickle took the lead for good on the 89th lap when he slipped under Knotts going into the first turn Trickle battled with Mike Eddy of Midland, Mich., for the lead until Eddy's car slowed on the backstretch of the 110th lap.

“I think I broke a rocker arm in the engine,” Eddy said. “It was a shame, we had four new tires and a full tank of gas We were ready to go.”