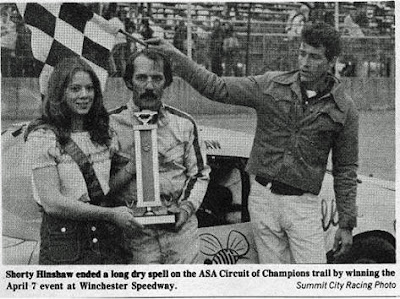 Winchester, Ind. (April 7, 1974) – Although he finished third in the series point standings last year on the American Speed Association “Circuit of Champions” late model stock car circuit, Shorty Hinshaw of Mooreland, Ind., had never been to victory lane in an ASA-sanctioned race.

Under cold, blustery skies, the diminutive, mustached driver baptized his new Camaro at Winchester Speedway with a wire to wire victory in the 50-lapper.

Hinshaw’s faultless drive netted him his first big win but he was followed to the checkers by a persevering Kenny Simpson of Bedford, Ind., the 1973 ASA “Rookie of the Year” who battled the slings and arrows of outrageous fortune all day.

Secure in the trophy dash with a third-fastest qualifying time, Simpson appeared to have the race won on the last lap when Conan “Moose” Myers, in a passing attempt, apparently broke a tie rod end that sent both cars into the backstretch wall of the half-mile. Myers’ car was damage extensively but Simpson was able to start his heat race, albeit with much flapping sheet metal.

Closely following Jim Hines and Mike Eddy in his heat, Simpson was sent headlong into the fence when the pair crashed, dislocating Simpson’s rear axle and necessitating non-stop work for him to join the feature field.

Hinshaw shot into an immediate lead in the 50-lap feature, out dragging Jim Hines into the first turn. In the early going, Hinshaw was pursued by Harold Scott and the two built a 3 second lead on a pack consisting of Hines, Gene Prosser, and Simpson, locked in a battle for the third spot.

All the more determined after the constant misfortune of the day, Simpson immediately attacked Prosser when the green was displayed on lap 33, passing for fourth through the first two turns. Carrying his momentum, Simpson overhauled Hines on the same lap to secure third.

With Hinshaw conducting the pace from the lead, Simpson set out after Scott and hounded him incessantly until he commandeered second place on lap 39. Although attempting to catch Hinshaw boxed in slower traffic during the final 10 circuits and drawing to within 2 seconds of the leader, Simpson couldn’t overhaul the flying Hinshaw who was not to be denied his first major win.

At the finish, Hinshaw and Simpson were followed by Scott in third; Hines in fourth; and Gene Prosser in fifth. Young Mike Eddy maintained a narrow lead a narrow lead in ASA points with a sixth place finish.