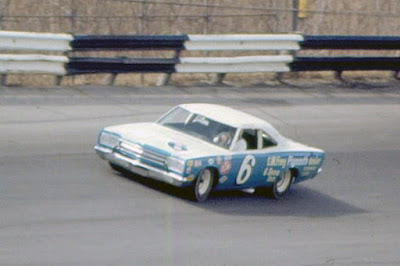 Salem, Ind. (April 13, 1969) – Les Snow of Bloomington, Ind., capped a record-breaking Sunday afternoon at Salem Speedway with a half-lap victory over Bobby Watson in the 100-lap ARCA late model stock car feature.
Snow, driving a 1969 Plymouth, outjumped Benny Parson’s Ford Torino on the start and was never headed, coming home a runaway winner in 34 minutes and 32 seconds for the 50 miles on the high-banked half-mile paved oval.
Both Snow and Watson, who drove a ’69 Super Bee Dodge, finished a lap ahead of the 25-car field.
Snow’s clocking erased Parson’s year old mark of 34 minutes and 55 seconds. Earlier, Parsons broke his own one-lap qualifying record of 20.02 seconds with a new mark of 19.48 seconds, Parsons’ 1969 Ford Torino Cobra is fitted with a 427-wedge engine, the “Boss 429” power plant being an illegal engine on the ARCA Circuit.
Parsons ran second for the first 35 laps trailed by Andy Hampton in his 1969 Charger and Watson. On the 36th go-round, Watson got hot and zoomed by his two rivals to take second, but at the halfway mark popped a tire and the resulting pit stop dropped him deep in the field, moving Iggy Katona and his 1967 Charger into fourth place.
The only yellow flag of the day came on lap 85 when Forrest Haliburton blew a tire and hit the wall.
Katona finished fourth with Ramo Stott’s ’69 Plymouth in fifth place.
An interested spectator at Salem was Charlie Glotzbach, recently resigned from NASCAR racing.