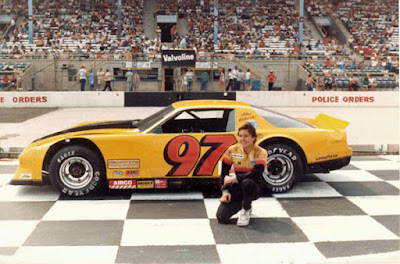 West Allis, Wis. (July 10, 1983) – In a spectacular race that often resembled a war, Alan Kulwicki marked the zenith of his career by winning the American Speed Association-sanctioned Miller 200 by a scant tenth of a second over Bob Senneker at the Milwaukee Mile.
Contending for the top spot the entire 200-mile race distance, Kulwicki took the lead for good with 21 laps remaining but had to resist all challenges by Senneker and six other drivers compressed into the lead towards the end of the race.
Three brief cautions for minor incidents during the final 20 miles provided no chance for Kulwicki to work on building a lead and Senneker had his Camaro dead even with Kulwicki's Firebird in the final turn only to be out-accelerated to the final flag that the pair flashed under in overlap fashion.
Immediately behind the dueling leaders at the finish were Joe Ruttman, charging hard, after a late race caution pit stop for fresh tires; ever spectacular Gary Balough in fourth; smooth Mike Miller in fifth; then Butch Miller, Mark Martin, and Bobby Dotter rounding out the top eight, all on the lead lap.
Kulwicki’s nerves were no doubt frayed by late cautions at lap 100 – 103 when Terry Senneker got a foul of the charging Joe Ruttman and spun in turn one, and again when David Green spun on lap 104, though he recovered to finish 20th. A final caution appeared between 189 and 193 to police oil from the main straightaway.


“It’s the biggest win, the biggest day of my career,” Kulwicki said after the race. “And I’m really happy it happened in front of my hometown fans and the people who’ve helped me so much since I began racing.”