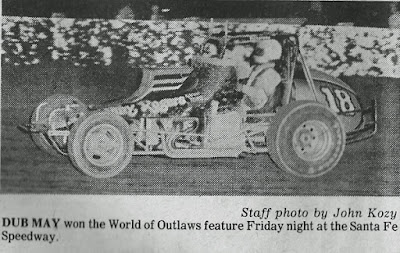 Willow Springs, Ill. (July 6, 1979) – Dub May took the lead from Bobby Allen on lap 27 and went on to win Friday night’s 40-lap World of Outlaws sprint car feature on Santa Fe Speedway’s longer oval.
The event had to completely restarted following a spectacular mishap involving Lee James and fast qualifier Rick Ferkel.
The accident triggered when James’ racer became airborne after slamming into the front stretch wall. James’ car landed on the nose of Ferkel’s mount, sending both vehicles into a pair of flips. Neither driver was injured, but booth machines were through for the evening.
Allen vaulted into the lead when the contest was completely restarted and the Hanover, Penn., chauffeur survived three caution periods to lead the opening 26 rounds.
The first of three cautions occurred on lap 3, when Randy Smith’s car stalled in turn four. Three circuits later, the yellow was thrown again, this time for a three-car tangle involving Al Thomas, Kerry Norris and Jim Moulis in turn four. The final yellow necessitated when Dick Smith’s car stalled in turn one on lap 11.
May, who had advanced to second on the sixth lap, finally overhauled Allen on the 27th lap to claim the lead he would never relinquish.
Allen remained in second the rest of the way and finished ahead of Larry Gates, Sammy Swindell, Bobby Kinser and John Stevenson.
Gates, Kinser and Swindell were heat winners while Swindell also won the 10-lap B-main. Alan Barr won the 6-lap trophy dash.