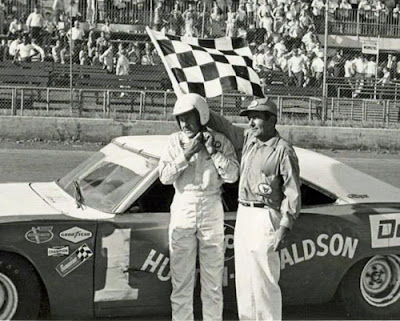 Ernie Derr is presented the checkers after winning at Lincoln, Neb.


Lincoln, Neb. (June 16, 1968) – There have been harder cakewalks for Ernie Derr, but Ramo Stott, who worked like a beaver this winter, is still wondering what was wrong.
The two racing veterans were hooked up in a rare tie for first place in the IMCA point standings going into Sunday’s late model stock car action at the Nebraska State Fairgrounds. They aren’t anymore…
Derr waltzed to victory in the 50-lap feature while Stott settled for third. Actually, Ramo was happy that he finished.
There’s something drastically wrong with my car,” the Keokuk, Iowa, native pointed out after the races. “During the last 25 laps, I thought for sure it was going to blow.”
After the first heat, Stott pronounced his 1968 Plymouth, “flatter than a pancake”. Later he put in new spark plugs. That didn’t help either.
Sandwiched in between was another mechanical failure. The transmission went out and only a furious installation of new parts allowed Stott to compete in the feature.
Ramo couldn’t have felt bad though. He could just consider the plight of nearly half the 23 drivers on hand. No fewer than 11 went to the pits to stay during the afternoon’s action.
Consider Lenny Funk, known as “Mr. Bad Luck” on the circuit. During the season, the Otis, Kan., driver has finished only two features. Sunday, he didn’t even come close…far from it.
His engine blew on, believe it or not, on the third lap of pre-race warmups. “That’s the fourth engine I’ve blown this year,” Funk said, shaking his head.
Then there was Blaine Morrow of Mt. Joy, Ill. Involved in an eight-car pileup on Saturday night at Des Moines, Morrow spent all afternoon trying to get his car to run…to no avail.
A four-car tangle on the first lap of the feature finished Ole Brua of Albert Lea, Minn., who had the fastest time in qualifying, and Butch Hall of Russell, Minn., Both car sustained front end damage.
For the 45-year-old Derr, it was just another win among many over the last two decades. The mustached veteran, who seems to go on forever, confirmed he has no plans to retire.
“Heck,” he smiled. “I have to eat, don’t I.”