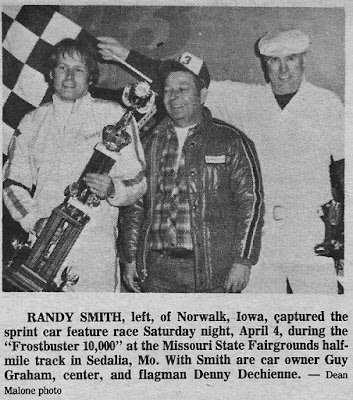 Sedalia, Mo. (April 4, 1981) – A hearty band of race fans assembled at the Missouri State Fairgrounds Saturday night to watch Randy Smith of Norwalk, Iowa, race home the winner in the sprint car half of the annual “Frostbuster 10,000.”
The event, sanctioned by the National Speedways Contest Association, was held on the half-mile dirt oval at the fairgrounds and drew drivers from as far away as California.
Smith started on the outside of the front row and roared into the lead at the drop of the green flag. Although pressured by Doug Wolfgang of Sioux Falls, S.D., Smith was credited with leading every lap of the 30-lap race for winged sprint cars.
In fact, Wolfgang once passed Smith, but a caution flag negated that effort and Smith breezed home from there after the restart. Wolfgang would later retire with a flat tire.
Fans and drivers alike were stunned to silence on the third lap of the last chance race after a grinding crash left two drivers hospitalized, one in critical condition.
The mishap occurred when Tommy Thomas of Tulsa, Okla., lost control of his sprinter, bounced off the inside guardrail and was hit by oncoming traffic, upending his mount. Jerry Burdick of Independence, Mo., slammed full speed into Thomas’ car. Curt Grogan of Kansas City also became involved but suffered no injuries.
Thomas was taken to a Sedalia hospital and then transferred to the University of Missouri hospitals in Columbia listed in critical condition with cut to head, skull fracture and neck injuries. Burdick was hospitalized in Sedalia with leg pains and possible spleen damage.
Finishing second to Smith in the main event was the “One-Armed Bandit” Check Amati of Freeman Spur, Ill., while Ricky Hood of Memphis, Tenn., wound up third. They were the only cars on the same lap as Smith at the end and both were nearly a full lap behind.
Heat win were recorded by Sonny Smyser of Lancaster Mo., Smith, Hood, Wolfgang, and defending NSCA champion John Stevenson of St. Paul, Minn., who dropped out of the feature with mechanical woes. Joe McCarthy of El Paso, Tex., won the last chance race.
Despite cool temperatures, an estimated 3,500 race fans were on hand for the evening’s program.