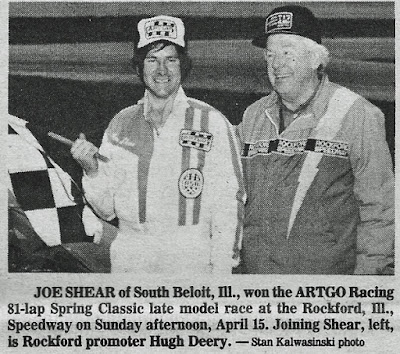 Rockford, Ill. (April 15, 1981) – ARTGO Racing opened its late model stock car racing season under cold, cloudy skies at Rockford Speedway on Sunday afternoon, with Joe Shear wheeling his 1981 Camaro to victory in the 81-lap ‘Spring Classic’.
The South Beloit, Ill., speedster, a former six-time track champion at the quarter-mile Rockford speed plant, took command on lap 47 from pacesetter Fred Campbell of Battle Creek, Mich., and went on to score the win under extreme pressure by second place finisher Larry Detjens of Wausau, Wis.
The victory was Shear’s third in ARTGO competition since the series began in 1975.
Finishing behind Shear and Detjens in the main event were three-time ARTGO champion Dick Trickle of Wisconsin Rapids, Wis., Jim Sauter of Necedah, Wis., and Campbell.
Twenty ‘stars and cars’ started the feature race on the high-banked quarter-mile with Pat Schauer of Watertown, Wis., grabbing the lead from his outside front row spot. Schauer and his Camaro set sail, putting daylight between him and his nearest competitor. Schauer would remain in the top spot until lap 26 when his mount lost oil pressure sending the young charger to the pit area.

Campbell and his Camaro, running second to Schauer, inherited the lead with the likes of Trickle, Shear, Sauter and Detjens moving rapidly towards the number one spot.
Campbell would keep his car out front until Shear, driving a hard race through the pack, took over the lead. Detjens, who twice had to come from the back of the pack because of minor spins, set his sights on the top spot. Taking over fourth place from Campbell on lap 53, Detjens sped past Sauter on lap 55 and then stole second from Trickle on lap 57.
With less than 30 circuits to go, a battle for the lead between Shear and Detjens was played over and over as the pair of Camaro’s whistled around the high-banked Rockford facility. In the heat of the battle, the two stock cat jockeys rubbed fenders a number of times trying to get the advantage over the competition.
Detjens, who was last year’s ARTGO ‘Spring Classic’ winner, finished a car length behind Shear at starter Bill Gronley’s checkered flag, with Trickle the same distance behind Detjens.
In time trials, Detjen’s qualifying lap of 13.643 seconds topped a field of 44 entrants.