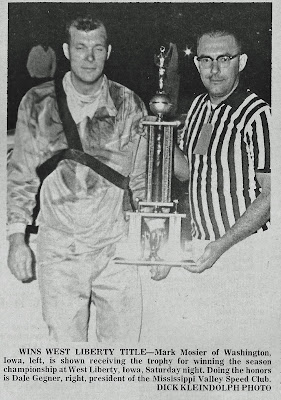 West Liberty, Iowa (September 18, 1970) – Mark Mosier of Washington, Iowa, took the lead early from John Moss of Iowa City in the 50-lap Mississippi Valley Speed Club season championship feature and went on to score the victory.
The win moved Mosier into second place in the MVSC standings with 207 points. Moss still leads in the standings, 222.5 points, with only one race to go in Columbus Junction. Pokey West of Westchester, who finished third in the feature, dropped to third in the standings with 201.5.
Earlier in the evening, Mosier was quick qualifier with a 26.68 second timing. Wahlee Brown of Rock Island, Ill., had thee second fastest time of 27.35 seconds and Walt Carney of West Branch turned the half-mile oval in 27.41 seconds.
Mike Brooks of Hartford picked up the win in the trophy dash, Mel Morris of West Liberty grabbed the victory in the first heat, Ron Prymek of Iowa City took heat number two, Bud Darting of Wilton was the winner in heat three and Ron Perdock of Washington picked up the checkered flag in the fourth heat. Byron Buchele of Muscatine won the 15-lap semi-main. Results –