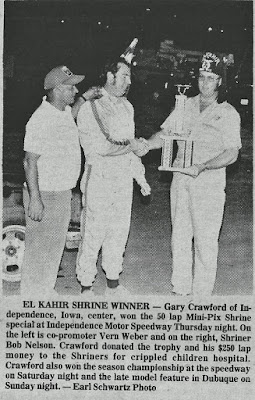 Independence, Iowa (August 31, 1978) – Gary Crawford of Independence, Iowa, rode a first-lap maneuver to a 50-lap late model victory in the first annual Mini-Pix Shrine special at the Buchanan County Fairgrounds on Thursday night.
Crawford started on the second row but roared past front row starters Curt Hansen of Dike, Iowa, and Glen Martin of Independence, Iowa, to take the lead. He would hold the top spot for all 50 laps, picking up a very popular victory in front of the hometown fans.
“I figured the best time to pass would be early,” said the Independence farmer. “I knew the track would get dry-slick at the end and the tires I had would work better early on.”
Obviously, making money wasn’t Crawford’s only concern. He earned a total of $1,250 in feature winnings. But he donated the $250 he earned in lap money back to the Shriner’s hospital fund, which the beneficiary of the evening’s races.
Crawford also returned the winner’s trophy which will be put in display at the children’s hospital in Minneapolis.
Crawford’s pre-race analysis proved correct. In fact, it almost cost him the race.
Crawford’s car went too high on lap 33, and Glen Martin tried to get underneath Crawford but was blocked out by a slower car.
Hansen, who earned the pole position by winning the first heat, finished second to Crawford, passing Martin on lap 48. Denny Osborn of Cedar Falls, Iowa, also got around Martin on the last lap to place third.
Thursday’s late model turnout was one of the most impressive fields in the state this season. Waterloo, Iowa’s Ed Sanger failed to place in the top-five in his heat and didn’t qualify for the feature.