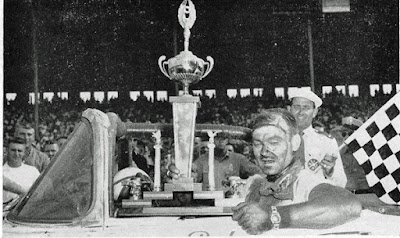 
The 31-year-old diesel mechanic made only one brief pit stop for his 1957 Chevrolet convertible powered by a 283-cubic horsepower Corvette motor, which wheeled him across the finish line in 2 hours, 43 minutes and 59.28 seconds.


Despite 19 yellow flags, that reduced the speed of drivers to allow stewards a chance to clear the track of wreckage, Dake’s time was 12 minutes faster than the 1957 mark established by Keokuk, Iowa’s Don White.


Taking second place behind the $1,000 winner was Lenny Funk, the Otis, Kan., wheat farmer and Saturday’s time trial leader in a 1959 Plymouth Fury. He finished a full lap behind Dake.


Third place went to a second Iowan, Keokuk’s 27-year-old Dick Hutcherson, in a 1957 Pontiac. Another Keokuk driver, Ramo Stott, was squeezed out of fourth place by Bob Potter of Duluth, Minn.


A third Keokuk racing luminary, Erne Derr, pulled up from 24th to sixth position in the first 100 laps. But he was forced out of action on the 124th lap when a rock punctured his oil pan. The International Motor Contest Association circuit’s number one driver was sent to the sidelines with a burnt-out motor.


A half hour after the finish the first three cars were ordered impounded for a teardown inspection by IMCA secretary John Libby of St. Paul, Minn., who said it was a “routine check”.


Dake started in the eighth position and kept that position through the first hour while Omaha’s Bob Kosiskie and Funk battled each other for the first 49 laps.


Kosiskie, driving a 1959 Thunderbird, dropped back to second going through lap 15, then stayed on Funk’s tail-pipe past the 125-lap mark. An overheated motor forced the Nebraskan to the pit for water and Merton Williams of Rochester, Minn., took over the second spot.


On the 141st lap, Bill Harrison of Topeka, Kan., running third at the time, lost a wheel. Dake then slipped past Williams and finally caught Funk on the 154th lap.


Bob Hardy of Beaumont, Tex., hit the wall on the 155th lap and both Dake and Funk took advantage of the slowdown or a brief refueling stop.


Dake, however, got out of the pits ahead of Funk and remained in front the rest of the afternoon, clocking an average of 29 seconds per lap in the late stages.


Only 21 of the 33 starters were still running at the finish.