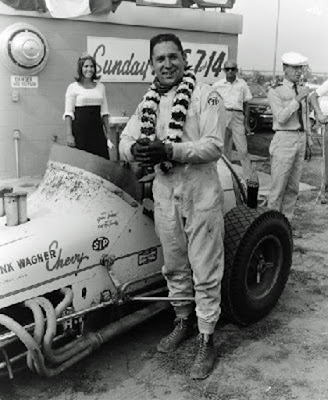 Jerry Richert in victory lane at Terre Haute. - Bruce Craig Collection
Terre Haute, Ind. (August 7, 1965) - Jerry Richert's blue-trimmed white No. 63 Wagner Chevy sprint car has a little slogan lettered in red just below the windshield on the inside of the cockpit. It reads "Mash the Gas."


The Lake Forest, Minn., driver "mashed the gas" Sunday afternoon in the International Motor Contest Association sprint races at the Action Track when he was fastest qualifier, winner of the 30-lap feature event, the semi-feature and the 5-lap handicap race.


Sunday was Richert's third appearance in and in copping the feature he used the same strategy as he won with in 1965—hits the gas hard and ride high on the turns. He moved race track real-estate considerably in his win with a rooster-tail of clay following him on the turns every lap.


The IMCA sprints were an opening day feature for the - Vigo County Fair. About 3,500 race fans were on deck to see the six-race card. Forty sprintsters qualified in one hour and fifteen minutes and the entire program was completed at


Richert's qualifying time for the afternoon was 23.73, closely followed by Dick Gaines, , with 23.80. Slowest qualifying time of the day was a 29.55. With exception of the feature and semi-feature races inverted starts were used with the slowest car in pole position and the fastest car on the outside of the last row.


The 30-lap IMCA feature actually provides race fans with three big races in one. There was a race for first and second place with Dick Gaines constantly on Richert's shove bars.


There was jockeying for third and fourth spots between Jay Woodside and Jerry “Scratch” Daniels and there was a battle for fifth and sixth laurels between Don Nordhorn and Jim Moughan.


Sitting on the pole for the feature, Richert took the lead on the first turn after the green flag and had no trouble with mud being flicked on his windshield by other cars until he started lapping late in the race.


The speedster had a comfortable lead over Dick Gaines, second fastest qualifier of the day, until the tenth lap when Gaines pulled within about a car's length. The two drivers waged a constant battle for supremacy from then until the end of the race, with Richert always riding high on the turns and Gaines attempting to take him a little lower on the track,


But Richert led from the green flag until the checkered flag. It was Richert ahead by 25 feet as the checkers waved.


About 50 yards back of the battle for the lead, City, , pilot, and Daniels, , and a teammate of Richert's were battling for third and fourth positions. Woodside started in fourth spot and Daniels in sixth, but they were in third and fourth place at the end of the first lap and finished in that order.


Nordhorn and Moughan started in seventh and eighth positions respectively and finished in fifth and sixth spots. Other finishers in the feature down to tenth place were Don Brown, Bill Puterbaugh, Ray Lee Goodwin and Butch Wilkerson.


In the first heat race of the afternoon, “Scratch Daniels” went into the lead over Bill Puterbaugh on the fourth lap and drove ahead to victory. Don Hewitt finished second and Ray Goodwin was third. There was no posted time for the race due to the yellow caution light being on during part of the action.


Dick Gaines copped the second 8-lapper of the card. He started in last place among the eight starters but drove hard and was in second place by the end of the first lap. He took the lead coming out of the second turn on the second lap and went ahead to win the checkered flag. Don Nordhorn was second and Jerry Blundy finished third. Again, due to the yellow flag necessitated by a spin, there was no time recorded for the race.


The third heat winner was Bill Myers, an , speedster. Myers started in fifth position and drove through heavy traffic to victory. The race was slowed when Edgar Elder spun coming out of the second turn on the first lap and was stopped when Elder's auto snapped an axle and rolled, then went end over end on the fifth lap Jerry Poland finished second and Chuck Lynch was third. The race was restarted after the track was cleared of wreckage.


Besides the winner, Richert, in the 10-lap semi-feature, second place went to Puterbaugh, Wilkerson was third, Don Brown finished fourth and Bill Utz was fifth.