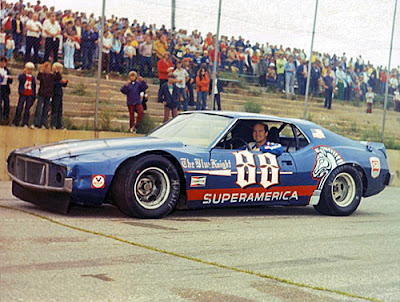 Tom Reffner
(July 20, 1975) - Tom Reffner expertly guided his 1974 Javelin to victory in the second race of the “Red, White and Blue” state championship series at the Wisconsin International Raceway Sunday before a crowd of 6,846 sundrenched fans.


Reffner smoothly worked his way through the 25-car starting field and powered past Dave Watson of on the 20th lap. From that point on Reffner continued to increase his lead and won the 75-Iap feature on the half-mile paved oval with a quarter of a lap to spare over Watson.


The Rudolph racer, known as one of the nation's leading race car drivers, compiled his 47th win of the year, far ahead of the record setting pace of 67 wins in a year established by Dick Trickle in 1972. Reffner gave a warning of things to come during qualifications when he flew around the track in 20.82 seconds, breaking a year old record held by Joe Shear of 21.12.


, driver Bill Oars broke into an early lead from his pole position and held on for four laps before Rich Somers of passed him in the third turn.


Dick Trickle moved past Somers on the 11th round only to be passed by Watson two laps later. Meanwhile, Reffner slipped past Trickle on the 18th lap and two laps later motored past Watson with John Ziegler, the winner of the first race of the series glued to his rear bumper. Ziegler remained in the picture until the 69th lap when he dropped out with mechanical problems while running second, about six car lengths behind Reffner.


Watson finished second with Larry Detjens of making a late charge to earn himself third place money. Detjens wheeled his hemi-powered Dodge Challenger past Somers, Shear and Trickle during the final five laps of the race.


The 20-lap semi-feature was an exciting duel as Kaukauna's Pete Parker set the early pace with his 1973 Cameron. However, Whitey Harris of Lake Villa, Ill., got past Parker in the eighth lap and was later passed by teammate Al Schill of . Harris placed second with Parker third and Alan Kulwicki fourth.


Parker scored the most popular heat race win of the afternoon when he stubbornly held off John Speer and Kulwicki in the second preliminary race. Parker led from start to finish.