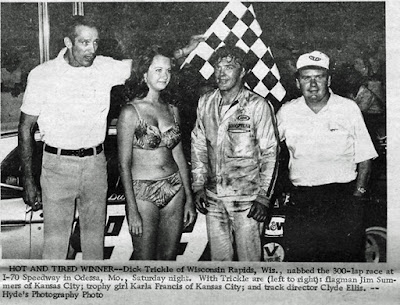 (July 22, 1972) - Dick Trickle made his annual invasion of and it proved just as successful as last season as the , stock-car driver won the third annual I-70 Speedway national championship.


Trickle, driving a 1970 Mustang, took the lead from Dave Wall, of , on lap 105 of the 300-lap contest and cruised to the finish. Wall, driving a 1970 Chevelle, finished second, but he trailed Trickle by two car lengths.


Wall started on the inside poll by virtue of winning Friday nights 25-lap feature. Also on Friday, wall set a new one lap record by touring the high-banked, half-mile in 18.57 seconds. This broke the old mark of 18.59 seconds set by Terry Bivins on July 1. Bill Martin of , set a 15-lap mark on Friday night with a clocking of 5 minutes and 70 seconds, bettering the old mark set by Wall in 1971.


Wall held the early lead while Trickle, who started in the seventh spot, bided his time as a field sorted itself out. On lap 64, Joe Wallace of , skidded in turn three and a six-car pile up ensued. Wallace, Three of the drivers, Stallsworth of Commerce, , and Jim Hager of , would not return.


From then until the 105th lap when Trickle took the lead, it was a stirring duel between him and Wall. They were the only leaders – Wall with 104 laps and Trickle with 196. They received $5 for every lap led.


Other than the crash on the 64th lap the race was slowed by six yellow flags. Trickle caused all the late excitement when his car blew an engine while taking a white flag on the 299th lap. He drove the final half-mile with a huge cloud of white smoke pouring out of his car.


The 40 starters earned their positions in Friday's preliminaries. The speedway had a total of 57 entries.