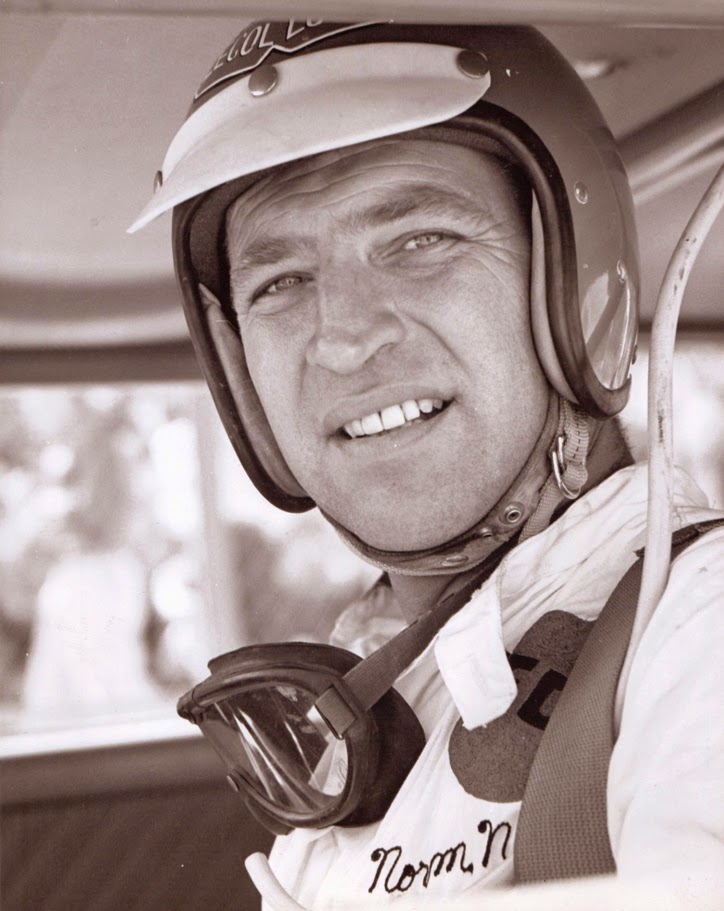 Norm Nelson
Du Quoin, Ill. (September 1, 1963) – The Norm Nelson Plymouth team completely outclassed the field by finishing one-two in Sunday’s 100-mile USAC stock car championship before 20,100 state fair goers.
Nelson flashed by Johnny Shipman’s checkers a scant second ahead of Paul Goldsmith, who had won the last two stock car meets here. Curtis Turner and Don White, both driving Fords, edged out the new one-lap record holder, Herb Shannon, driving a Plymouth.
Shannon led the 28-car field for the first nine laps, most of which were under yellow. Lloyd Ruby cracked the outer rail on the south turn during the initial lap.
On the 10th circuit, Goldsmith, who replaced A.J. Foyt after the latter moved into the Zecol Ford, scooted past Shannon on the main stretch. His lead was short-lived, however, as Nelson edged Goldsmith on the very next circuit.
A foursome vied for the third spot as Shannon gave way to Rodger Ward, White and Parnelli Jones. By the 50th circuit, Jones had captured the coveted spot only to ultimately lose it when an empty fuel tank forced him into the pits. Curtis Turner improved his 11th starting position and overhauled the group by lap 55.
The day was dotted with mishaps. During hot laps, Foyt plowed into George Viullemot’s spinning Pontiac, without any serious damage to either car. After the green following Ruby’s mishap, Lee Drollinger spun in the north turn. Three circuits later, Gary Bettenhausen spun in the same spot. On lap 35, Foyt, who wasn’t having a good day, spun in turn two but got restarted. However, three laps later, he called it quits for good.
The Nelson team had the field lapped after Jones moved into pits on lap 96. The twosome also grabbed $6,500 of the record $20,600 purse. Nelson’s share was $3,824, also a record for a winning driver.
Records commenced early in the day when Herb Shannon erased Paul Goldsmith’s two-year-old track record of 41.07 seconds. Shannon turned in a scintillating 40.44 mark on the dirt mile.
Results –