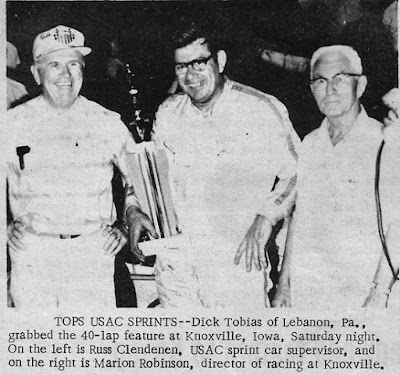 It was a happy end to a day that had been full of hardships for Tobias, who is in his second year on the USAC circuit.
After arriving in by plane from , Tobias was unable to find a ride to . He ended up paying a cab driver $18 to get here.
Then, Dick went through two fuel pumps and spun out once during time trials before getting his difficulties corrected.
Tobias wound equaling the best time in trials, 21.77 seconds by Joe Saldana of , and then easily captured the second heat.
Tobias started in the third row in the feature, moved into second behind Sessions on lap 10 then overtook the Indianapolis 500 veteran on the twenty-first trip around the half-mile track.
Only Sessions and regular Ray Lee Goodwin of , who started on the pole, challenged seriously after that, Sessions taking second and Goodwin third. Lee Kunzman of Guttenberg finished fourth after starting in fifteenth position and Tom Bigelow of , was fifth.
Two minor accidents delayed the feature with Jim Malloy of , the fourth place finisher in the Indy 500, being involved in both. Malloy, Merle Bettenhausen of Tinley Park, Ill., and Bill Puterbaugh of , got tangled up on lap three with Puterbaugh hitting the wall and being forced out of action.
Then on lap 29, Malloy and Saldana spun coming out of turn three and both went to the sidelines.
Greg Weld of , had engine trouble, and completed only eight laps of the feature.
Results –
1.
2. Sam Sessions,
3. Ray Lee Goodwin,
4. Lee Kunzman,
5. Tom Bigelow,
6. Rollie Beale,
7. Gary Bettenhausen,
8. Johnny Parsons Jr., Reseda,
9. Karl Busson,
10. Don Nordhorn,
11.  Darl Harrison,
12. Jimmy Oskie,
13. Larry Rice,
14. Merle Bettenhausen,
15. Joe Saldana,
16. Jim Malloy,
17. Larry Cannon,
18. Doc ,
19. City,
20. Bill Puterbaugh,