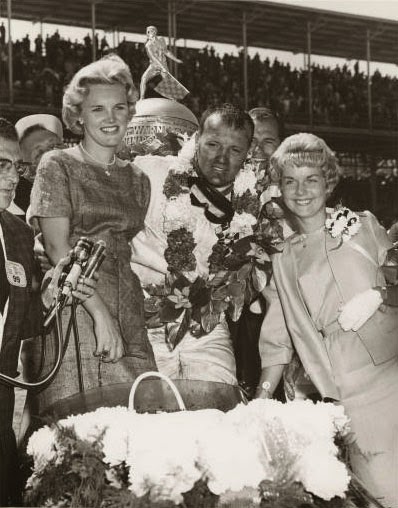 Indianapolis, Ind. (May 24, 1962) - The Golden Anniversary 500-Mile Race is one that will be remembered for a long time when fans talk of the great races of other years.


Only twice in the 45-race history of the event in 1912 and 1960 has the outcome been decided at a later point than in the 1961 classic. A Hollywood script writer couldn't have done a better job than Lady Fate did in preparing the story of A. J. Foyt’s record-breaking triumph.


Seldom has a reigning national champion been given so little consideration as a possible winner than was given Foyt.
Many people looked on the handsome Texan’s title as sort of a fluke - won on the strength of a terrific streak of hot driving and an equally terrific streak of bad luck on the part of the “real” driving champion, 1959 500-winner and national champ Rodger Ward.


When possible winners of the Golden Anniversary “500” were mentioned, Ward’s name came up most often. Well it should have…


After all, hadn’t Ward been cheated out of the honor of being the first two-time winner since Bill Vuckovich in 1960 by a bad pit stop and a frayed tire that made it imperative for him to relinquish a small, but commanding lead with just two laps to go?


What’s more, Ward had a new roadster out of the garage of the acknowledged king of the Brickyard, A. J. Watson. And the master himself was the chief mechanic on the car. If ever there was a likely “500” winner, Rodger Ward was it.


But for those who didn’t think Ward could win there were plenty of other possible winners. The defending champion, Jim Rathmann, two-time pole winner Eddie Sachs, the great rookie Parnelli Jones and the world driving champion Jack Brabham all got more consideration than did Foyt.


But when all was said and done on May 30, who was in Victory Lane drinking milk and accepting the Borg-Warner Trophy? A. J. Foyt.


But A. J.’s win was not without its tribulations. Each of the aforementioned pretenders to the Speedway crown (except Brabham in his outclassed Cooper-Climax) made a run at the $400,000 pot of gold. And so did the 1952 Speedway winner Troy Ruttman and qualification record holder Jim Hurtibise.


As a matter of fact they made such a run at the crown that Foyt didn’t get into the lead until the 76th lap. After getting in front, Foyt’s job was far from finished. He was to lose the lead on seven more occasions before he took over for good on the 198th lap.


A. J. appeared to have the race in the bag when he relinquished the lead to Ward to make his third and supposedly final pit stop on the 161st lap. Sachs, his principal challenger by this point, had already made his final stop, but Foyt had time to get back on the track before Eddie could move ahead of him. And Ward, nursing a sickly engine, had his third stop ahead of him and would lose the lead -back to Foyt when he pitted for the final time.


So it was with victory in sight that A. J. pulled to a halt in pits. When he pulled away 20 seconds later that victory was for all practical purposes down the drain.


A fueling valve had failed during the stop and Foyt hadn’t received a drop of fuel. What his pit crew found out immediately, A. J. learned 25 minutes later when he had to stop a fourth time on the 184th lap for more fuel.


Sachs zoomed into the lead and into what appeared to be a sure bet trip to Victory Lane. Barring a miracle, he was a winner and Foyt a runner-up.


That miracle came on the 198th lap when Sachs had to come in change a threadbare right rear tire. Trying to slow down and save his tires, Eddie changed his driving style with the result being just the opposite of what he had hoped for.


As Sachs’ crew pounded the wing nut into place on the new tire, Foyt flew by and three laps later took starter Bill Vanderwater’s checkered flag. A little more than eight seconds later Sachs took the checkered flag for second. Ward, who fell a lap behind the leaders after his final stop, finished third, with Shorty Templeman fourth and Al Keller fifth.


The remainder of the top 10 included Chuck Stevenson in sixth, rookie Bobby Marshman in seventh, Lloyd Ruby in eighth, Brabham in ninth and another rookie, Norm Hall in tenth.


Earlier in race, the huge throng, estimated at over 200,000 people, was given a chilling thrill when a spectacular five-car accident on the main straight away eliminated Don Davis, A. J. Shepherd, Roger McCluskey, Bill Cheesbourg and Jack Turner. Although Turner flipped and the others were bounced around rather badly, none of the drivers ware hurt.