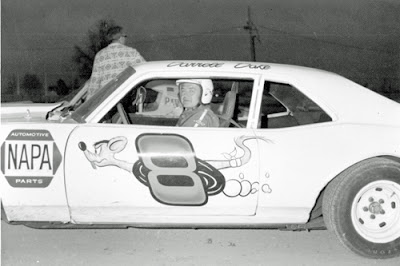 Freeport, Ill. (August 15, 1977) - Darrell Dake’s win in the 30-lap feature race at Freeport Raceway Sunday night was the result of a victorious effort against two types of opponents.

The Cedar Rapids, Iowa driver had to battle not only the other racers vying for the lead, but also those who were experiencing mishaps which stopped the race and prevented Dake from opening up the lead he might have been able to.

Dake, whose 27.09 clocking in the time trials was good for second place, grabbed the lead early in the race and outlasted Whitey Harris of Lake Villa, Ill., to take top honors. Harris was on Dake’s tail for much of the contests, and the frequent interruptions in the race did not help Darrell's position.

“Those kinds of races are bad. They let them (the other racers) catch up,” smiled Dake after the evening’s action had been completed. “Anything can happen out there. If you come out of a corner wrong or make one mistake.... If you’re ahead, you can recover. My car didn't run as well as last week, but I finished better.”

Initial leader Steve Buholzer had trouble early, as did Dave Hutmacher. Both of those racers were able to reenter the race. Tom Hamburg was not so lucky. He ran into the infield on the far straightaway while leaving one of his wheels across the track against the wall. Jim Strube, feature winner here two weeks ago, had to quit midway through the race because of trouble.

The race was free from trouble for a while. Then, after 21of 30 trips around the half-mile dirt oval had been completed, Mike Niffenegger went up high on the curve and hit the wall at turn number one, Niffenegger, who car had been rolled in a race Sunday afternoon at Wausau, Wis., was forced to leave the competition, which once again had to be slowed down. Trouble with the restart caused even more delay.

As the race started again, Dake managed to hold off Harris to win. “My car runs good here (at Freeport), but I’ve had bad luck here; I’ve broken a lot of stuff on my car,” Dake said. “They made me race tonight.”

Chuck Havorka of Freeport won the second heat and then opened up a huge lead over Pfeiffer in the semi-feature. Havorka’s car started smoking near the end of the race, but he had built up enough of a cushion to easily hold off the charging Pfeiffer. The semi was also a race filled with mishaps and cars with mechanical difficulties.

The worst accident of the evening came in the second heat race. After the race had been restarted after John Englekins had spun out on the first curve (he was unable to continue racing), Willie Reingts, Max Zimmerlan and Joe Weatherford were involved in a wreck on the near straightaway in front of the grandstand. Reingt's car sustained the most damage, most of it to the right front of the car. Havorka captured that race after taking an early lead from Barry Tuff.

Harris came from the back row in the trophy dash to take the lead from Freeport's Jim Thruman on the next-to-last lap and continue on for the win.

His 26.29 was good enough to win the time trials, as the track was slick early, until the racers had run over it several times.