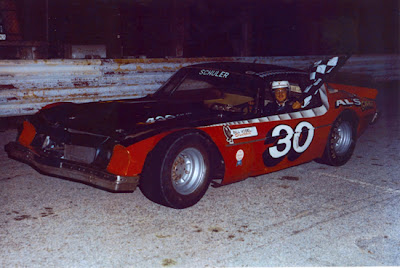 Kaukauna, Wis. (June 13, 1976) - Larry Schuler, a 23-year-old fireball from Lockport, Ill., swept to victory in convincing style Sunday afternoon at the Wisconsin International Raceway in Kaukauna as he wheeled his low-slung 1976 Camaro to victory in the first race of the “Red, White and Blue” state championship series.

A crowd of nearly 7,000 persons, the largest at the Kaukauna raceway since 1968, watched in amazement as Schuler picked off the Midwest’s best short track stock car pilots in his surge to the front.

Schuler, the afternoon’s second fastest qualifier, battled with Tom Reffner of Rudolph in the early stages of the race as the pair moved to the front. Reffner earlier had topped the 46-car field in time trials with a 20.88 lap around the half-mile paved oval.

However, minor mechanical problems slowed Reffner after 10 laps in the 50-lap event, and he finished a distant ninth, a full lap behind the streaking Schuler.

Gary Hemmerling of Beloit punched his 1973 Camaro into the lead and stayed out front until the 15th round when former state champion Rich Somers of Stevens Point gunned his Copp’s Discount Food Stores Mustang into the lead.

Schuler, meanwhile, had worked his way up to third position and in two laps whizzed past both Dick Trickle of Wisconsin Rapids and Somers.

“The car ran good last Thursday night here, but today we changed tires and it went even faster,” Schuler said after the victory, the biggest of his four-year driving career.

“I had to add 500 pounds to my car,” he noted. Schuler was required by Wisconsin rules to add the weight to meet the minimum weight rule in the state. When he races in Illinois the car weighs 2,750 pounds, much under the rules in Wisconsin.

The added weight didn’t affect his performance at all as Trickle, the 1972 state champion, chased him the final 33 laps, but finished four car lengths off the winning pace.

Mike Miller of Wisconsin Rapids wrestled third spot away from Joe Shear of South Beloit, Ill., with the 1975 state champion, John Ziegler, fifth in a 1976 Camaro and Somers sixth. Ziegler was not driving the 1976 Firebird he won the “Spring Opener 50” with at WIR in May after a disagreement with his former car owners.

The feature event was free of any accidents and yellow flags, however, Ken Carter - the “Mad Canadian” - ended the tranquility abruptly when his world record auto leap of 19 cars fell short and he piled into the 16th, 17th and 18th cars in the line-up, flattening all three with a loud crash as parts flew off the deflated cars in all directions.

Carter was not injured and told the large crowd that the transmission on his jump vehicle was not working properly and his speed was not right for the jump.

The 20-lap semi-feature was a three car tussle between Dennis Paasch of Marshfield, Greenville’s Bob Bennett and Mike Mattson of Marquette, Mich. Mattson throttled his 1973 Mustang into the early lead with Paasch overtaking him on the seventh lap when

Mattson drifted a bit wide in the second turn. Mattson continued to pressure Paasch throughout the race with Bennett finishing a close third followed by Lenard Reimer of .Janesville, Rio’s Ray Kreyer and Wayne Weckworth of Appleton.

Trickle won the “Dash for Cash” with his 1976 Ford Granada, edging out Reffner by less than a car length.

Freedom’s Bob Abitz led the first 20-lap qualifying race for three laps before surrendering the lead to Al Schill of Franklin. Schill was overtaken by hard-charging Jim Back of Vesper on the seventh lap and Back went on to win the race ahead of Tom Musgrave of Arlington Heights, Ill., and Schill.

In the second 20-lap qualifier, Bill Oas of Bloomington, Minn., held off Somers for the win with Doug Strasburg of Johnson Creek third.

Ed Howe, the highly regarded race car builder from Beaverton, Mich., did not race after he refused to allow track officials to weigh his car and check it for cubic inch displacement. All the other cars in the races were checked according to the rules.