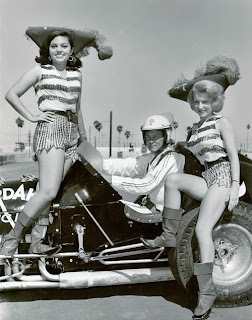 Tampa, Fla. (February 4, 1965) - Gordon Woolley, the balding race driver from Waco, Tex, turned the tables on Lady Luck at the Florida State Fair on Wednesday and picked up an $805 paycheck for winning the inaugural feature, the consolation and taking second in a special match race.


Last year, Woolley started the season at the fair with a bad crackup and it proved a portent of the rest of the season which saw him involved in several more accidents before he and a doctor agreed that he must quit for the rest of the year.

A crowd of 6,100 fans watched the host of new race stars run through 51 time trials in quick order in the early afternoon, opening the Golden Anniversary celebration of the International Motor Contest Association.

Wednesday, it was a smiling Woolley who posed with Speed Queen Cookie Benkin and car owner Hector Honore to receive the Pepsi Cola Trophy.

“I believe things will change this year,” said Woolley, 42, and IMCA champion of 1963. “I started bad here last year and wound up bad. Maybe this good start means that I'll get the championship back. I know Hector would like to have it back.”