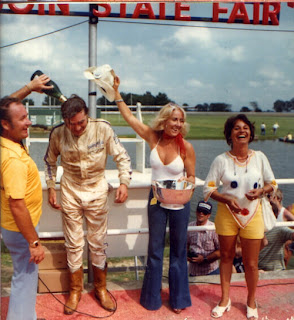 Paul Feldner receives a champagne shower after scoring his first career USAC stock car victory at the DuQuoin State Fairgrounds on August 27, 1977. Feldner would go on to capture the series' title that same season.

Rookie Dave Watson of Milton, Wis., who compete in only five of the circuit’s 10 events, totaled 865 points to place fifth in the standings, ahead of 1976 Rookie of the Year Wayne Watercutter, Gordon Blankenship, Don White, Jack Bowsher and Dave Decker. Watson was voted the division’s rookie of the year.

Feldner broke into the division in 1966 and became one of the circuit’s most consistent performers finishing in the top seven in the standings annually from 1970 to 1975.

In 1976, Feldner had his own 1974 Charger demolished in a multi-car wreck at Wisconsin State Fair Speedway on July 11. Wutke then purchased another 1974 Charger for Feldner from Butch Hartman, but bad luck continued to plague him the rest of the year and he finished 12th in the standings.

However, Feldner’s luck did an about face in 1977. He scored his first career USAC win in a 100-mile race at the Du Quoin (ill.) State Fairgrounds on August 27 and recorded three consecutive second-place finishes en route to capturing the point crown.

Stott was the division’s most prolific winner with three triumphs, but he missed one race, failed to crack the top 10 on three other occasions and had to settle for bridesmaid honors.