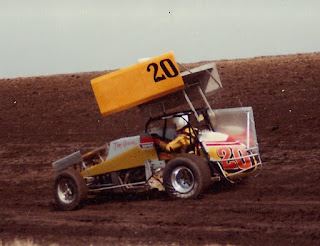 Green, driving the Bob Trostle sprinter out of Des Moines, Iowa, won the Friday night 20-lap main event on the fast 1/2-mile fairgrounds dirt. Tom Corbin of Carrollton, Mo., led the first four circuits until he was passed by Green who led the remaining laps to score the win. Corbin took second despite a dropped valve in the late stages of the race. Manny Rockhold of Pekin, Ill. and Springfield's Jim Moughan put on the battle of the night finishing third and fourth respectively. They raced side-by-side throughout the event.

A couple of side stories made the evening a little more interesting. Cliff "Woody" Woodward of Kearney, Mo., made a triumphant return after two broken legs and a broken back sustained in a horrific crash at Knoxville, Iowa, just that past May.

The other story of the evening was a three-car crash between Bobby Ensminger of Burlington, Iowa, Jim Hetrick of Galdstone, Ill. and Randy Plath of Carmen, Ill. The three got tangled together heading down the backstretch and Ensminger's sprinter barely missed colliding with a pace car parked close to the judge's stand. Plath ran into the infield public address announcer's speaker. No was injured but at the same time, no one barely noticed because of the melee that occurred on the front stretch at the same time. Dave Kinsel of Springfield was upside down in turn four.

Green decided to head to Knoxville Raceway on Saturday night to compete in twin 20 lappers, which gave NSCA point leader Sonny Smyser his night to shine. Woodward, piloting a car owned by Roger Anderson of Burlington, led the first eight laps of the 20-lap affair until Smyser, in the Vielhauser sprinter from Kansas City, got past Woodard in turns one and two in a daring maneuver and led the rest of the way. An impressive showing by Woodard helped him finish second, Rick Howard of Kansas City took third and Jim Moughan, who spun early, battle back to claim the fourth spot.

After sweeping both 20 lap features at Knoxville Raceway on Saturday night, Tim Green reappeared at the Wapello County Fairgrounds in Eldon, Iowa on Sunday evening, August 8th for another NSCA-sanctioned event.

The 20-lap "A" main featured four lead changes with Jim Hetrick leading the first lap, Bob Thoman of Higginsville, Mo., the second round and Woodward taking charge until lap 11 when Green got past him and led the rest of the way for his third straight win in three nights. It wasn't as easy as it sounded as Woodward proved to be a pest the whole way, often running side-by-side with Green until the checkers. Smyser, Bobby Layne of Kansas City and Thoman were the top five.