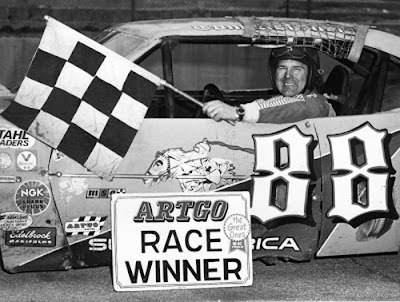 Tom Reffner of Rudolph, Wis., is all smiles in victory lane after earning his first ARTGO victory since 1979 at La Crosse Interstate Speedway on May 23, 1982.

Burgess, the 1978 ARTGO rookie of the year, won the first of two 50-lap events and took runner-up honors in the second 50-lap main to claim the overall title at the 8th Annual Dr. Pepper 100 at LaCrosse Interstate Speedway on Sunday, May 23, 1982.

Jim Back of Vesper, Wis., led the field of 20 cars to the green and maintained the point until lap seven when Burgess slid past Back and started building a healthy lead. On lap 12, Tom Reffner slammed the backstretch wall hard after getting tangled with Joe Shear bringing out the race's only caution.

Running in the second spot was fast qualifier and defending ARTGO champ Dick Trickle, although he was being hard-pressed by Jim Sauter of Necedah, Wis. Trickle’s charge to the front ended on lap 19 when a clogged fuel line sent him to the pits. Sauter took over the second spot but was no match for Burgess for the remainder of the race. Burgess crossed the finish line 2.7 seconds ahead of Sauter when the checkers dropped. Beloit’s Joe Shear finished third after his near miss with Reffner, Ted Musgrave of Grand Marsh, Wis., took fourth and Jim Weber of Roseville, Minn., rounded out the top-five.

Reffner managed to piece his 1981 Superamerica Camaro back together for the nightcap. Twenty-two late models took the green with Mike Miller of Wisconsin Rapids grabbing the top spot. Making his first start of the ’82 season, Miller led the first 17 laps before Burgess, fresh off his first win, passed Miller and grabbed control on lap 18.

Burgess stayed up front until lap 24 when Reffner took command. Four cautions slowed the action in the second 50 lapper. On lap 16 Jay Sauter backed into the walls between three and four with his dad Jim spinning coming off of turn four at the same time. The second caution came on lap 26 when Trickle’s fuel overflow hose came loose spilling fuel on the track

A couple of laps later Al Schill, winner of the ARTGO season opener at Rockford, smacked the wall hard in turn three. The final yellow came out on lap 37 when Jim Weber spun his Camaro in turn one while battling for position with Musgrave.

Through all the stoppages, Reffner managed to hold off a determined Burgess to claim his first ARTGO victory since 1979. Burgess held on to second, which gave him the overall title, Jim Sauter took his second third-place finish of the day, Mark Martin of Batesville, Ark., settled for fourth and Ted Musgrave rounded out the top-five.