Hansen wins as all hell breaks loose at West Liberty 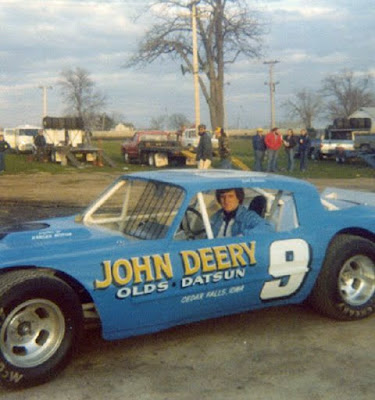 West Liberty, Iowa - Brightly colored late models and sportsman littered the infield. More than 6,000 fans braved the dampness and cold of the April weather eager to see their favorite drivers churn up some dirt. It was the annual Spring Championships at the half-mile West Liberty Fairgrounds on April 14, 1979.

The best of the best were here for the season opener. Names like Hansen, Dake, Niffenegger, Weedon, Sells, Webb, Hearst, Moss and Sanger all had their cars finely tuned and ready to go.

The preliminary races were run without much incident. Right through the entire sportsman program and right up to the late model feature, fans were treated to some outstanding racing as the track was in better shape than what had been anticipated.

That’s when all hell broke loose…

Twenty cars lined up in 10 rows for the start of the green. The field got too far strung out coming out of turn four and the flagman decided a re-start was in order. Around the track they came for a second attempt. The second green came out and the front two rows sped towards the first turn. For rows three and back, however, it was a different story.

No one knows for sure what happened but Cedar Rapids’ Darrell Dake, starting on the outside of row three, took the brunt of the mishap. He found himself sideways on the track, his car ramming the outside wall. Many of the 14 cars behind him had absolutely nowhere to go. The fact that even some of them got through with none or a minimum scratch was a miracle.

Dake began rolling down the straight as cars wildly tried to avoid the accident. Gary Webb of Davenport and hometown favorite Mel Morris got involved and Leon Plank of Mondovi, Wis., went out of control smashing the cement retaining wall that protects the official’s stand on the infield side. Dake, Morris and Webb were finished for the evening and although Plank was able to get his car back out on the track, he wasn’t a factor.

After the restart, traffic moved smoothly for four laps until Kalona’s Mike Niffenegger and Dike, Iowa’s Curt Hansen tangled in turn four while running in second and third. “The Flying Dutchman” tagged the wall hard and was forced to retire.

A few laps later, Joe Merryfield of Des Moines and Roger Dolan of Lisbon collided with one another, again in turn four. Merryfield smacked the wall while Dolan flipped end over end – both cars eliminated from action.

Through all of the action, Hansen managed to track down early leader Pete Parker of Kaukauna, Wis., and sped away for the victory. Ed Sanger, who started at the rear of the field, managed to avoid all of the excitement ahead of him to take runner-up honors while John Connolly of Delhi, Iowa, captured third in a tight battle with Muscatine’s Dave Birkhofer and Marion, Iowa’s Steve Keppler.

Hansen, driving for Vince Fiala, had both a brand-new Camaro and Olds Cutlass. The Camaro turned in the fastest time on the evening at 23.471 and the Cutlass was seventh quickest. He finished second to Waverly’s Darrell Sells in the first heat in the Camaro but came back to win the third heat in the Olds Cutlass. Gary Crawford of Independence and Sanger copped the other heats while Jim Burbridge of Delhi outdueled Rollie Frink of Davenport to win the semi.

With the sixth fastest timers inverted, Hansen could’ve started the feature sixth in the Camaro or seventh in the Cutlass. He opted for the Camaro and won easily.

Tony Stewart of Washington had little trouble winning the sportsman feature once he got out front. Mark Liebfried of Rickardsville finished second, Bryan Housely of Davenport took third, Denny Stewart of Davenport grabbed fourth and Mike Klinkhammer of West Branch rounded out the top-five.