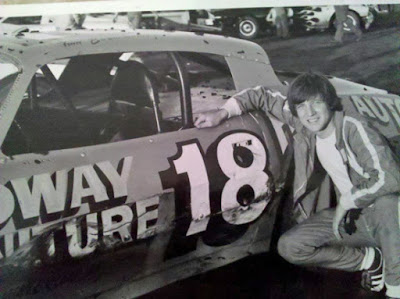 Omaha, Neb. (April 23, 1979) - A little “luck o’ the Irish” played a part for Sunset Speedway promoter Larry Kelley for the 7th Annual Spring Invitational. The two-day show with a purse of over $10,000 was slated for Friday and Saturday but heavy rains postponed the event until Saturday and Sunday.
Even though the track dried out by the start on Saturday, the pit area and infield was a quagmire of mud. None the less, the $2,000 winner’s share and the early date drew some of the best pilots from around the Midwest.
When the final tally was taken, 50 late models and 44 sportsman cars checked in for what had become a Nebraska tradition. A grandstand full of race fans was nestled in ready for some high-speed action. As mentioned, some of the top name drivers were on hand.
Headlining the cornhusker contingent were Al Druesdow, Jerry Wancewicz, Glenn Robey, Bob and Joe Kosiski from Omaha, Dean Ward from Grand Island, Jay Stearns from Lincoln and Al Humphrey from Giltner. Iowans who made the trip over included Bill Rice, Don Hoffman and Joe Merryfield from Des Moines, Bob Shryock from Estherville, Ed Sanger and Tom Bartholomew from Waterloo, Mike Niffenegger from Kalona and the defending champion Bill Martin of Council Bluffs.
Making the trip from up north was Bobby Saterdalen of Oronoco, Minn. and Leon Plank of Mondovi, Wis. South Dakota was represented by “Wild Bill” Liebig of Rapid City while North Dakotan’s included Bob Moody of Williston, Paul Schultz of Washburn and Bob Simmers of Jamestown.
The sportsman field was no less star-studded with Iowa pilots like Wendell Folkerts of Albia, Duane Bentley of Fairbanks, Earl Pruett of Marshalltown and Dave Trower of New Hampton while from the Nebraska side was Norm Robinson of Bellevue, Rex Nun of Lincoln and Mel Sorenson and Steve Kosiski of Omaha.
Saturday’s events were mainly qualifying events including heats, non-qualifier races, “A” and “B” consolations and a special last chance heat. In late model action, Al Druesdow got the hometowners off to a great start with the win in the first heat; however, the next three went to Leon Plank, Ed Sanger and Don Hoffman. The sportsman heats went to all Iowans, Folkerts, Bentley and Joe Gascoigne of Council Bluffs and Jim Andersen Des Moines.
On Sunday, the main attraction was the 50-lap late model feature with Iowans dominating the action. Plank would take the lead before giving way to Niffenegger. The “Flyin Dutchman” would lead the next 27 circuits before surrendering the point to Tom Bartholomew.
Bartholomew, driving brand new Sanger-built Camaro moved away from the field and eventually won by more than half a lap. Merryfield, Sanger, Niffenegger and Wancewicz were your top-five finishers.
The defending champ, Bill Martin finished seventh, which was a miracle in itself. During Saturday night’s qualifying races, Martin tangled with the front stretch cement wall, mounting the barrier and eventually ending up on its lid. Martin was shaken but not stirred and worked feverishly all night. He qualified for the feature by winning a non-qualifier heat on Sunday.
The sportsman feature was no contest with Bentley taking the victory over Andersen. Three Nebraskan’s Kosiski, Sorenson and Nun finished out the top five.